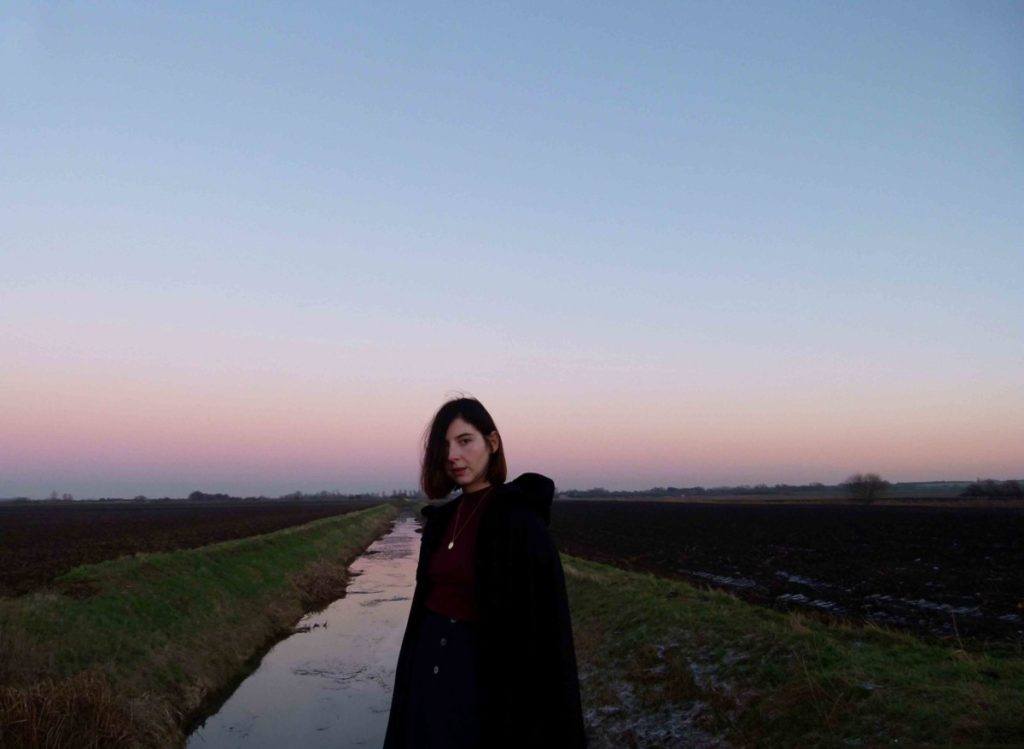 My earliest memory was reaching up to the headstock of my Mum’s Gibson Sunburst feeling curious, tinkering with the tuners without realising what I was doing, there was always something to make a tune on in our house. Recording the charts from the radio on to tape and always having a fascination with the radio and the one to one relationship. Seeing my dad performing and watching the control he had over the crowd and wanting to have that, to make people feel a certain way, all these things were what got me into music (and The Spice Girls/Tina Turner)

I’m releasing my first album in May.  ‘Away From Mountains’ which is inspired by the Fenland landscape sits alongside a project about women in the Fens. Earlier this year I worked with the Arts Council England, Metal Culture, Natural England and the National Trust to produce a series of performances to run alongside the release of the album. It’s coming out through my own label Trapped Animal which a friend and I started last year.

Quite informal/intimate.  I don’t like much of a gap between myself and the audience. I’m aware of what people are coming for and that connection/ escapism.  I went to see Nick Cave and The Bad Seeds at the 02 and there was no gap. Twenty thousand people in an arena and I think it’s probably the most intimate gig I’ve ever been to. Holy moly.

I spent my 20s as a radio producer, always rushing around, never had any time, and I was ill as result for a while – now I take my time, I’ve been writing but it’s just (over the last couple of years) opened up into another purpose for me of wanting to release something, I like the slow burn approach and work very much off of what feels good. I’ve never had a sense of urgency with my music, I’m not sure if that’s something I’ll regret when I’m older, but I’m pretty happy with how this album has grown and become its own thing.

I drive a lot, so physical is my main port of call. I don’t like listening to music with headphones, and my very good friend Jes Kerr who recorded a lot of the album and now makes the most incredible transition line speakers says it’s sacrilege to listen through my laptop speakers. So loud and proud in the car mostly. Otherwise it’s streaming on Spotify. I love making playlists but it takes me hours and hours, it’s like making an audio collage and I get so deep in to it and then blink and the whole day’s over.

I’ve got a tour coming up in Ireland with Maija Sofia and Junior Brother, so have been listening a lot to them, Ireland’s finest! there’s a dark humour and darkness there and I get a lot from it.

Summers coming now so I’ll get the ancient compilation of tracks I made when I was 11 including tracks from the likes of Apache Indian (Boom Shak-A-Lak) and Beats International Dub Be Good To Me (you can thank me later).

I used to live with a girl called Kat Cashman (amazing artist/photographer) and she played Princess Nokia all the time so when I hear TomBoy I think of her and Cherry Cola centres me before I hit the day.