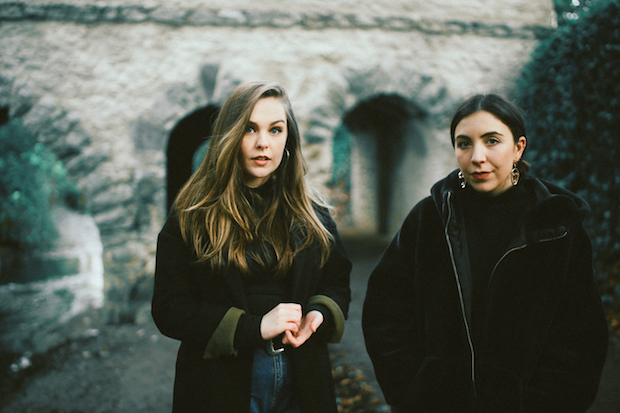 Morgan: We are Morgan and Gemma and we play in a band called Saint Sister. We’re both from the North of Ireland (Belfast and Derry), but we met while studying in Dublin and that’s where we’re based out of at the moment.

Gemma: We’ve both come at music from pretty different angles. I grew up playing classical and Irish traditional music, and went on to study composition in college. Morgan came at it from a songwriting point of view, and cites the great songwriters as a big influence: Joni Mitchell, Johnny Cash, Joan Baez.

Morgan: We’ve just finished our debut record ‘Shape of Silence’ which will be released this October. We’re very excited to share new songs again. We’ve poured a lot into the album and we’re very proud of it. We’ve also had the privilege of playing some incredible venues across the world. A highlight for me was supporting Lisa Hannigan across Europe or playing the National Concert Hall in Dublin last summer.

Gemma: The harp and our two voices are pretty integral to the live set, blended with synths, piano, vocal loops and sample pads. We play as much as we can with full band; adding drums and bass into the mix, but try to fill out all the arrangements as best we can in the two-piece set up. Our music is fairly quiet so the gigs have an intimacy to them, even on bigger stages.

Morgan: I’m not sure we’re the best people to answer that one! I don’t think we’re necessarily trying to be different, we’re just using the tools we have at hand; namely our voices, Gemma’s harp and some electronic production. It’s hard to be different in this day and age, when it seems like everything’s been done before, I think what matters most is honesty. We try to be as honest as possible in the making of our music, hopefully that keeps whatever we’re doing from going stale.

Physical vs Downloading vs Streaming…

Gemma: You can’t beat physical, in terms of quality and in support of the artists. Go and buy it!

How do you listen to music?

Morgan: I’m normally listening to music while I’m on the go, walking to our rehearsal space or on the bus or cooking but if I’m particularly looking forward to an album, for example Bon Iver’s latest; 22 A Million, I’ll make sure to take some time out and try to take it in as one body of work, on decent headphones and on my own.

Gemma: I’ve been going back to a lot of Steve Reich recently, and listening to a lot of Sufjan Stevens. Also an Irish artist called Maria Kelly who has just released some new music; her song ‘Stiches’ is absolutely beautiful.

Morgan: We just can’t wait to release the album and begin our first proper headline tour. We’ll be playing shows across the world from September on and will be heading to loads of places we’ve never been before so thats always exciting. All we want to do is release music and play shows, if we can keep that up we’ll be very happy.