I know it’s been only 7 months since I last reviewed Starcrawler but I did say watch this space! The band turn up in Norwich once again but not to a crypt, or a dungeon as they called it, but a church and a much bigger venue holding 275 people so how did they do?

Norwich band Gladboy started proceedings and although quite new to the music scene played and assured a confident set of “Junkadelic” indie. Not really my cup of tea, but they certainly had a small group of followers cheering them on near the barrier.

On to the main event, and the answer to how did they do was a positive yes! They almost brought the church roof down! I have never seen the Arts Centre be so packed and lively. It’s a fast paced show as on five minutes in, guitarist Henri Cash is already bashing out the riffs for the third song. Arrow de Wilde has already done all the gymnastic moves that an Olympic athlete would do in a day and revels in her Iggy Pop/Katie Jane Garside stage presence. Bassist Tim Franco, gazes ahead in a fixated fashion, focused on his Jah Wobble style bass chords whilst the drummer Austin Smith provides the driving force to the tightest of rhythm sections. Wilde is full of drama, she got down once and launched towards me behind the barrier with a fist clenched but she only gently touched the lens on my camera, and another time she looped the microphone lead around her neck and then tugged worryingly to tighten the cord.

The show lasted 45 minutes and the longest song was left for last “Chicken Woman” with dynamic call and response vocals from de Wilde and Cash resulting in a further 8 minutes of instrumental chaos with Wilde diving into the crowd and being surfed around the room until she could find an exit to escape from. Cash then leapt over the barrier and gave his guitar to a member of the support band to finish the show in a flurry of feedback.

Starcrawler are no snowflakes, they are not happy clappers either. They are definitely not reserved or tentative about what they are. Starcrawler are exciting, scary and in-your-face high-octane explosive rock. Catch them if you can, you won’t regret a second of it.

The Undeniable Link Between Music And Casinos 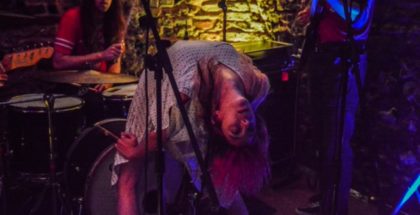