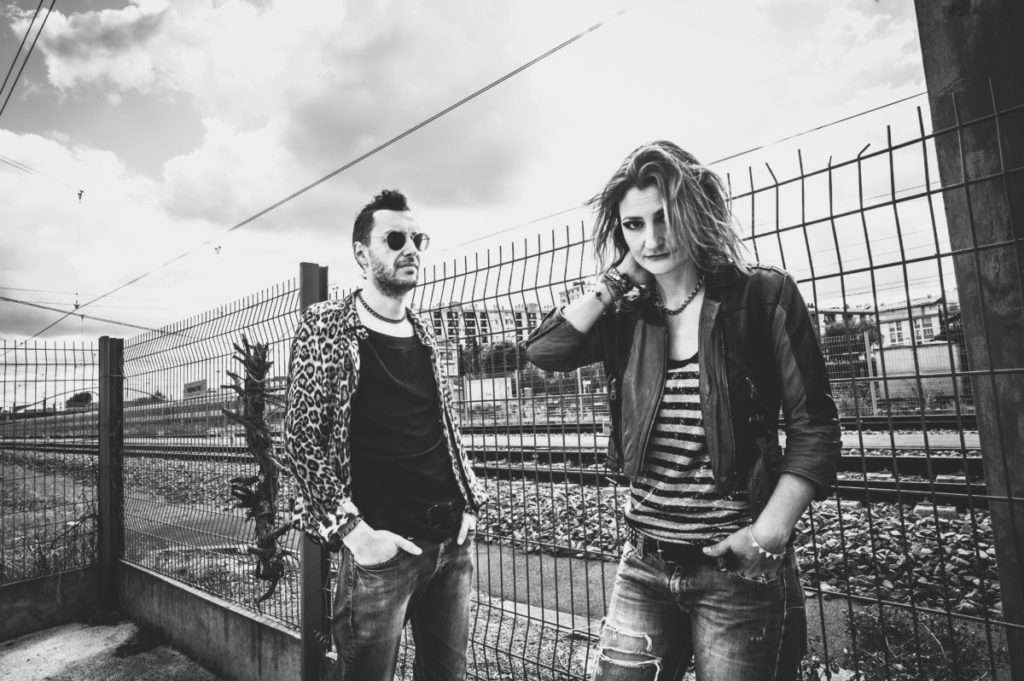 Red Money. We are a rock duo from Paris, but we moved to Tours 3 years ago. It’s been now 5 years since we started raging in this band and we are ready to spread our music in the entire world haha!

For us, music is the best way to be conscious and live a better life, everyday in all situations. Sadness, happiness, alone or with friends and family, or even with total strangers. It is the easiest way to express ourselves in the world in which we’re living. We are doing rock music – kinda punk sometimes. We are influenced with many different artists, but in the moment especially with artists like Thee Oh Sees, Dead Weather, Yak, Nick Cave, Pj Harvey, the Stooges… We like music to be in correlation with what we are living, and right now, it is in a violent society at the verge of a revolution. It explains the anger we have and the desire to say something true and raw.

This year we released our second album “Shake, Burn and Love”. We are really proud of it. We recorded it in Nashville with the producer Andrija Tokic. It was a fantastic experience, we recorded entirely in analog and were completely immersed into the studio during a week where days became nights and nights became days…

When we were in the US we made a tour in the midwest (Nashville, Tulsa, Springfield, Lawrence, Denton,..) and then Seattle and Eugene. It was just great! We met all kind of friendly and crazy people and had great times. It was epic and we didn’t slept a lot, but we would do it a 100 times again.

Everybody’s different. We just have to look closer sometimes. But I’d say that we don’t try to look like somebody else, or not to look like someone else. We just try to be ourselves, true, and express our feelings in any way possible. We got funny outfits though that we paint ourselves, we feel like superheroes with them when we go on stage, it’s kinda fun!

For us physical stuff are the best, and vinyls are Gold! We personally only buy music on vinyl, but streaming is a good way to discover artists because it’s cheap, well it’s free. You don’t want to spend 20 bucks on something you’re not sure to like when you’re stony broke! So If you can listen to it at home first, and then buy it if you like it, it’s cool. We agree for the music to be accessible and not too expensive, even free sometimes. The problem today is that only few people buy physical music (or even listen to music everyday), and platforms like Spotify or Apple are abusing of this with a very low remuneration for artists. So anyone can listen to everything and never buy anything. It should be balanced, but nothing in this world is. We, and I mean everybody, just have to find a way to live with it and make better choices in our everyday life to try balance it fairly. I mean radios are free to listen but it never was a problem. When we listen to an artist on streaming and love the music, we should always buy it after. Fair and fair. If everybody was doing it, there wouldn’t be any problem. We shouldn’t only blame the streaming platforms, we should blame the human morality.

And about the record labels, despite the changing market, we think they absolutely should keep on believing and help artists diffusing their music, encourage them by helping the most they can, and try to keep on discovering new and diversified bands in different styles of music from all around the world.

Our favourite new stuff at the moment is Yak, a band from London. One of the best rock’n’roll band from today’s scene, and they are fucking amazing on stage too! Playing a lot the new Parquet Courts and Ty Segall albums too. Recently discovered Mazzy Star “Tonight That I Might See” and loved it. Bought a Ravi Shankar and a Fela Kuti album, both awesome. Have to dig into Ice Age, discovered yesterday on the radio.

We are going to spend some times composing new material for the next album, and try them live for few months before recording them. We will go to Nashville and the US again around January and spend sometimes here to compose, tour, record, see friends and meet new folks! And we have a lot of surprises coming in the beginning of next year so stay tuned.

Questions answered by: Laure and Arnaud of Red Money…