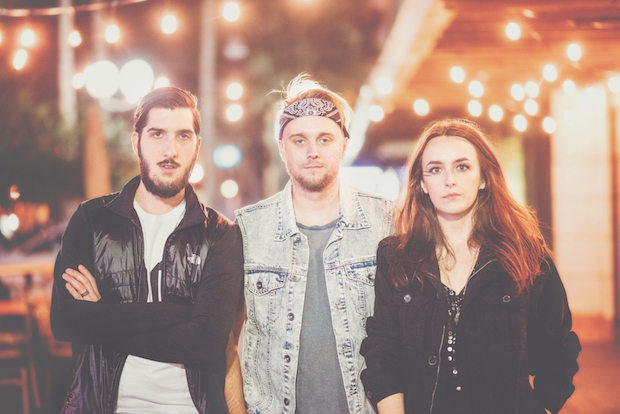 We’re WD-HAN, an alt rock band in the Tampa Bay Area. The band is me (Spencer) as lead singer, Lea on drums and Cal on guitar. We met in high school and have been playing together since – we’ve recorded a full-length album and 2 EPS and have played all over Florida. We’ve also toured Taiwan twice.

My introduction to rock’n’roll was AC/DC’s High Voltage album, which Cal bought me for my birthday before I ever started playing in the band. I was a bit of a late bloomer when it came to music, but I soon had every AC/DC album I could find and was exploring every other classic rock artist I could find. This makes me feel very old, but I was at the mall in the CD store every weekend, trying to find that week’s album. I discovered Incubus and some more modern acts and fell in love, and have tried to stay curious since then. My thought is I’ll listen to anything because it’s that artist’s point of view and I can learn from them.

We’ve released a full-length album and two EPs, have played shows all over Florida and have toured Taiwan twice. We’re currently writing our next release, and will be in the studio soon.

I think people are shocked by how loud we are as a 3 piece. On stage it’s about big fun and having the audience be at a rock show. Lea plays hard, Cal wails and I give everything I have, because the live show is the reason you’re in a band.

We’ve played with many national and international touring acts, including Paramore, Death Cab for Cutie, Kaleo, Misterwive, Vance Joy, Silversun Pickups and many more. We’ve played at festivals, schools and venues all over Florida and will be touring nationally soon.

Our band dynamic is unique – we’ve been playing together for so long, we’ve all been best friends since high school and I think it shows in our performance and songwriting. In our music, nothing is off-limits and we don’t think about it as fitting a genre – it’s about what sounds cool and what forwards the message of the song. Plus we have a badass female drummer.

I stream music, but I still LOVE albums and if one of my favourite bands comes out with a new one, I’ll buy a physical copy too. I want to support the artists, and streaming can’t touch the experience of opening an album and reading the cover notes, and listening to it from start to finish, just as the artist intended.

As for streaming services, they’re amazing and only make music more accessible. I do wish artists got more of a cut for their work, but I think in general people have more access and can hear a wider range of music than ever before and that’s a good thing.

It’s not brand new, but my favourite album from recent times is Home of the Strange by Young the Giant. It’s just… brilliant. The production, songwriting and performance are really inspiring to me!

A new EP, and getting out on the road next year to bring our live show to the rest of the country.