BACK TO THE PHUTURE ANNOUNCE SPECIAL SHOWS ON BBC 6MUSIC 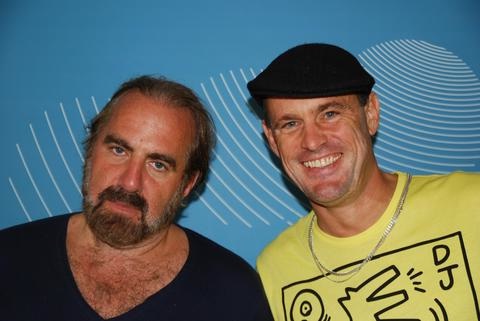 Electronic music enthusiast and record label MD Mark Jones will host two very special editions of his inspired radio series ‘Back To The Phuture’, which explores synthesised music past and present, and connects the dots between them.

In the first, a Bank Holiday special to be aired on Monday 30th August on BBC 6Music, Mark looks at the explosion of electronic music in New York during the Eighties, playing tracks by Afrika Bambaataa, Hashim and Shannon alongside contemporary NYC tunes by Holy Ghost! and LCD Soundsystem.

In the second hour of the show, Mark is joined by Arthur Baker, producer and pivotal figure in the NYC electro scene, to discuss his musical influences. Best known in the UK for his work with New Order, Arthur was a club DJ in Boston before moving to New York in 1981 and becoming involved in the music scene there. He went on to produce Afrika Bambaataa’s seminal tune Planet Rock, have a No. 1 single with Rockers Revenge, ‘Walking On Sunshine’, and reinvigorate the career of British jazz-funk band Freeez with his production on their worldwide hit ‘IOU’. Arthur tells Mark about life in New York during that time and plays the music that inspired his production work, including tracks by The Undisputed Truth, Kraftwerk and David Bowie.

In the final hour, there’s a guest mix from up-and-coming New York-based artist Penguin Prison, whose debut album, fusing electronic production with pop melodies, is due out at the end of the year.

The tracklisting is as follows:

Talking Heads – Once In A Lifetime

LCD Soundystem – I Can Change

Penguin Prison – The Worst It Gets

The Undisputed Truth – You + Me = Love

Penguin Prison Back To The Phuture Mix

Chicken Lips – You’re Not Ready Yet

Newcleus – Jam On It

In the second special, entitled ‘Bestivaloid’, to be broadcast on BBC 6Music on 5th September, Mark previews a selection of the electronic acts playing this year’s Bestival festival on the Isle of Wight, where Back To The Phuture has its own stage for the first time and will host the newly added Thursday night. This will feature live sets from Heaven 17, Janelle Monae, Howard Jones , Villa Nah and Kids On Bridges plus DJ sets from La Roux/ Dead Guy , Mark Jones & Rusty Egan.

In the show Mark will play a selection of music from electro artists playing this year’s festival, which takes place on September 9-12, including tunes from La Roux, Aeroplane, Marc Almond and Steve Mason. Mark will be joined by 80’s legend Howard Jones, who makes his Bestival debut this year. Best known for his hits ‘New Song’, and ‘Like To Get To Know You Well’, Howard has recently re-mastered his early albums which will be re-issued this autumn. He talks to Mark about these records, his forthcoming tour, and picks a selection of acts who influenced his own synth pop sound including tunes from Thomas Dolby, Tears for Fears and Scritti Politti.

In May Howard played a live set at the inaugural Back To The Phuture party and commented on this forthcoming radio appearance, ‘I am looking forward to keeping it in the family, whilst going Back To The Phuture, with the marvellous Mark Jones.”

In the final half hour, hotly tipped Mancunian electro duo Hurts – who release their debut album ‘Happiness’ today – will present a special mix with a selection of music that inspired their sound.