Sacha Baron Cohen is to play singer Freddie Mercury in a film about Queen, it has been announced.

The movie, written by Peter Morgan, will focus on the band’s career up to their landmark performance at Live Aid in 1985.

Guitarist Brian May said Cohen, best known for his alter-ego Ali G, had been in the running for the role for “a long time”.

May admitted in an interview with the BBC’s HARDtalk show that his casting would “probably be a shock to a lot of people”.

But he added: “Freddie Mercury was an awe-inspiring performer so with Sacha in the starring role, coupled with Peter’s screenplay and the support of Queen, we have the perfect combination to tell the real story behind their success.”

May and Queen drummer Roger Taylor will oversee the score for the film, which will take songs from the band’s back-catalogue and Mercury’s solo career,

The as-yet-untitled film is being produced by GK Films and Robert De Niro’s Tribeca production company.

The movie is due to go into production in 2011. Morgan wrote the recnt cinema hit Frost/Nixon. 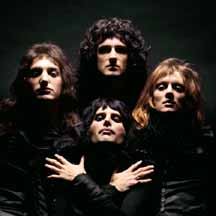