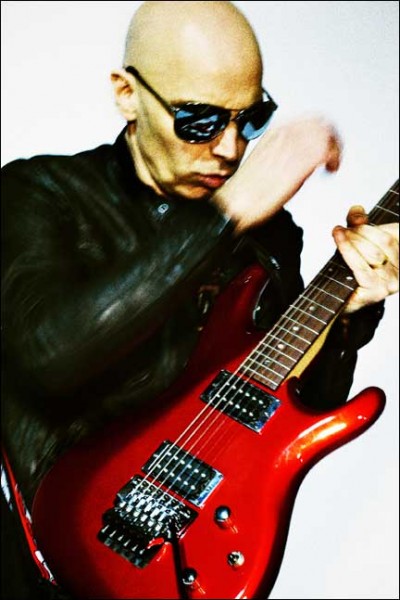 Joe Satriani, one of rock music’s most renowned electric guitarists, has announced details of his highly anticipated 14th studio album, Black Swans and Wormhole Wizards. The album will be released in the UK on Monday October 4th by Epic records and dovetailsSatch’s autumn 2010 UK tour, which kicks off on October 17th at the Manchester Apollo.

On the new album Black Swans and Wormhole Wizards, Satriani’s classic sound is accompanied by a surprisingly rich new texture.  The first single “Light Years Away” is destined to be a hit, alongside several other high energy offerings, like “Wormhole Wizards” and “Premonition.”

certified gold in the US by the Recording Industry Association of America with over 500,000 sales.

Over the last two decades, Joe Satriani has traveled the world, playing to sold-out crowds as both a headliner and as founder of the all-star “G3” guitar extravaganza. As one of the world’s most renowned instrumental artists, Satriani recorded Live in Paris: I Just Wanna Rock! in 2008 at The Grand Rex Theater in Paris, France. The live two-disc CD and DVD was released in February 2010 through Epic Records and contained such memorable songs as, “Surfing With The Alien”, “Flying in a Blue Dream”, along with recent hits like “Super Colossal” and “I Just Wanna Rock.”  Of his many solo albums, two have gone platinum and four others went gold, with 15 Grammy nominations between them.

The UK release of Black Swans and Wormhole Wizards dovetails Joe Satriani’s autumn 2010 UK tour, tickets for all UK shows are on sale now and available from the national credit card hotline 0844 888 9991 or can be booked online at www.ticketline.co.uk.

Phosphorescent Announce Tour With The National in November