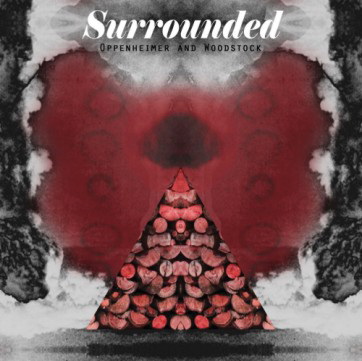 Gentle and tender without being contrived, and Surrounded have created a fragile moment of beauty in their latest offering: ‘Oppenheimer & Woodstock’. On the surface, this appears to be yet more indie rock with jangly guitars, but on a listen that is not even demanding close attention, one can find a work that isn’t so much twee sentiment as a genuinely heartfelt, melancholic sliver of light.

Starting with the dreamy guitar and organ sounds of ‘Terra Firma Legion Farewells’, this album quickly establishes a feeling of sweet melancholy through fuzzed-up atmospherics and a heartbeat rhythm. A slow, almost nostalgic feeling permeates every last element of this song, and the lyricism and vocal tone weave a bleak hopefulness into an otherwise smooth track. ‘Blender Magic’ is a slightly rockier piece, held up by a faster tempo cutting the hushed yet urgent vocals and the lilting, melodic guitar. Electronics in the form of tinkling keyboards bleed into the tapestry of sound, but no one element of sound outweighs another. Even the crystalline cymbals are buried in the softly moaning soundscape. This knack for creating intense yet understated landscapes of words and sound rises again in the melancholy guitars and string sections of ‘Archaeopteryx’ with its soul-influenced organ substituting a soaring chorus with blissful yet icy emotive power.

‘The Visible Man’ is a laid-back, wry cut of surrealism, with pop sensibilities in melodic acoustic guitar hooks flung over a string section and Surrounded’s oddly cinematic approach to music. Despite the band’s continued outside-the-box approach, there’s a degree of accessibility held in the glacial yet soft sound, and the end of the track where it fades into tinny old radio textures feels like a natural, well-executed finish. Following this is the warm and dreamlike textures of ‘Space Atlantic Satellite’, which with its strummed acoustic guitars and borderline sci-fi keyboard whistles feels like the lovechild of Grandaddy and The Cocteau Twins.

Continuing with the Grandaddy references is the fragile beauty of ‘1000 Colour Clash’. Blending brittle, trembling emotion with substantial sound to create an appealingly sparse yet subtly room-filling ambience, it gently hypnotises the listener with its naked cymbal rhythms played over the many interweaving melodies. Ditto with the almost upbeat rock tempo of ‘Played Out (Diamonds To The Woods)’, as the melody flirts coyly with true happiness, and the texture of the music as a whole lifts with less bleak whistles and more warm bass. Despite the faster, stronger rhythm and more substantial presence, this still retains the ghostly overtones of the album, feeling like a sepia-toned cinema flashback.

In spite of a decidedly acoustic body, there is something dark and sinister in the muted electric buzzing and feedback of ‘My Neighbour’s Blood Is Coke’. Something in the sound is much more immediate and cutting, with the string sections stepping back to allow for incisive guitar strumming and splintered-glass drum sounds. This stripped-back approach also allows the lyrics to play a much more integral role as they tell the tale of a world consumed by consumerism and empty showiness. The use of a more mainstream form for the sound here really does emphasise the message, more so than the rest of the album, where words get lost amid the beautiful sounds, and the track eventually descends into a squalling, piercing sonic collapse hidden among a searing blanket of emotive noise, reminiscent of more esoteric rock bands such as Brand New. This leads into the minimalistic acoustic beginnings of ‘Glycerine For Disneylands’, with a pervasive sense of gentle bleakness and lost innocence among the distant bleeps and sorrowful melodies. The vocals are much more forwards than in most tracks, still drenched in dreamlike echo effects, as Surrounded draw every last aspect of their sound to a rest. The lyrics too seem to be seeking an ending, carrying on the band’s symbiosis between mood, sound and words.

Let’s be frank: ‘Oppenheim & Woodstock’ is not a good-times radio pop album. However, what it is transcends that: we have been handed a beautiful and totally holistic approach to music. Every little piece of this album has been given just as much thought as the next. Although this can mean that there are no particular standout aspects, this means that as an entire being, this is a through-and-through complete entity of an album that has as many facets to marvel at as you could ever hope for, and with winter swiftly approaching us, here is the ideal soundtrack to the days inside under a blanket as you peacefully contemplate the world.