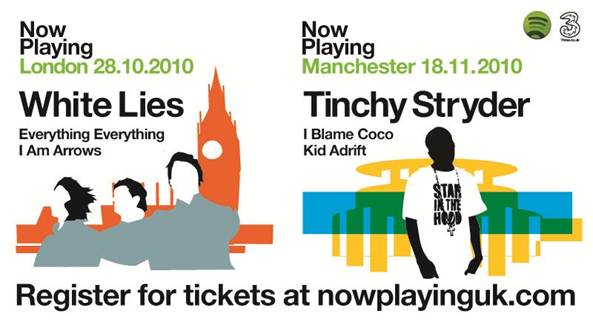 This autumn, Three – the UK’s biggest 3G mobile network – and Spotify – the UK’s favourite music service – go offline for a series of Now Playing live music events. Now Playing, delivered by Three and supported by Spotify, will help spread the word that Spotify on Three offers a world of music on your phone whilst showcasing the very best of British music talent.

First up on Thursday October 28th Now Playing takes over London’s Shoreditch Town Hall for a one-off event featuring three of the most highly acclaimed homegrown bands around. Ahead of the release of their forthcoming second album, White Lies play this exclusive London show alongside hugely tipped newcomers Everything Everything and I Am Arrows. DJ Eddy Temple-Morris will be on hand to spin records between sets on the night, in the glorious surrounds of one of the East End’s most historic venues.

A second Now Playing event takes place in recently renovated venue The Monastery in Manchester on Thursday November 18th with British rapper Tinchy Stryder, I Blame Coco and Kid Adrift. Previously home to an order of Franciscan monks, The Monastery now stands as one of the most unique music halls in the whole of the country.

Each venue has been specifically chosen for the Now Playing events for its stunning architecture and outstanding acoustics for live music.

White Lies, Everything Everything, I Am Arrows, Eddy Temple-Morris

Limited number of tickets will be available at the door.

Limited number of tickets will be available at the door.

Check out our Spotify playlists, hand picked by all the Now Playing artists, by visiting nowplayinguk.com, and whilst you’re there register for tickets to the gigs and win some fantastic music prizes. 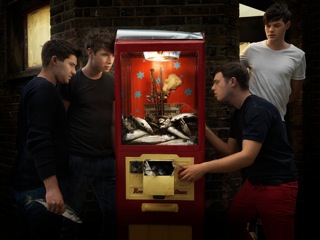