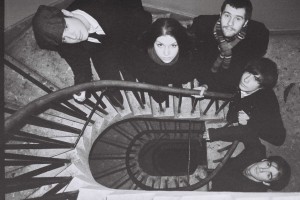 Letters were born amidst the ruins of desolate Scottish fishing towns and Edinburgh city centre bohemia in the winter of 2010. Five strong, Mikey, Georgie, Dougie, Kerr and Ed occupy their ranks.
First single ‘The Grand National’ is propelled by an urgent rhythm section, sewn with distinctive cellos, elastic basslines, and threaded with Michael Ferguson’s evocative, twitching vocals that draw vivid pictures of a childhood spent growing up in a dead-end estate, shifting from Orwellian microcosms to late night conversations that go nowhere then diving head first into waves of guitars and life affirming chorus lines. While the flipside ‘Pipe Dreams’ is an all-together different animal, initially decidedly more stripped back its throbbing bass and stabbing cello notes are shot through wide screen ambition into entangled male/female melodies that build and crash into melancholic refrains, vocalising that endless yearning for unattainable dreams. (“I seem to bring you down/Pipe dreams to sink around the town”)
Keen to avoid the tired clichés that sway albatross like around the necks of their checkered clad peers, Letters speak with a unique voice and arresting intensity, shot through with verve only the fearlessness of youth and fear of age can generate. Reckless arrogance, failed dreams, desperate boredom and childhood nostalgia coalesce here, bound together by the philosophical glue of Moran, Izzard and Hicks.
Letters will follow up this debut digital single release with a full physical EP in April 2011.

Letters will launch their single at Henry’s Cellar bar, Edinburgh on the 16th February, followed by a Scottish tour in March 2011, with a view to expanding into shows in the rest of the UK in April and May.
http://www.wewriteletters.co.uk