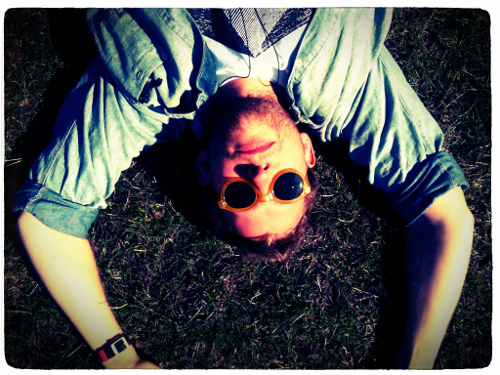 Ahead of his album ‘Shore to Shore’s release on March 14th, Norman Palm has announced another London show at the Old Blue Last on March 30th.

‘Shore to Shore’ is Norman Palm’s first conventional album release, since his last was a self-released 200-page artbook and accompanying loose collection of songs that saw him gain attention from the art press through to Perez Hilton.‘Shore to Shore’, released on March 14thonCity Slang (Arcade Fire, Caribou, Broken Social Scene), is a homogenic piece and a musical quantum leap. Palm gets rid of the singer-songwriter image, irony and shyness of his debut. ‘Shore to Shore’ is pop and love-long-distance set to music.

Start/Stop’, the album’s overture brings together what is later split up into its parts: Ukulele, electronic beats, crazy choirs, African vs. technoid vibes, warm vs. synthetic and above all floats Palm’s distinctive voice. In ‘Smile’ Palm sets foot into the American indie-terrain normally conquered by the likes of Wilco, he designs a 2.0 version of Paul Simon’s Graceland with ‘Images’, flirts with Beck and the Beta Band in ‘Landslide’ and spins out of ‘$20’ with an extensive Krautrock steelpan synth loop. ‘Easy’, virtually the title track of the album and a lyrical centrepiece (“Let’s all be friends with the telephone calls / Let’s all be friends with the departure halls“) layers voices, basslines and synthesizers. It’s almost like listening to the radio, only that radio stations of such quality are hard to find!

Palm produced the album with Janne Lounatvuori – their motto: nothing may stay as it was. This time Palm pre-recorded sketches of his songs with a laptop but soon acoustic guitars became a mere supporting actor. Palm and Lounatvouri played all the instruments they could find, recording in a small Berlin studio run by three ex-pat Finns. For ‘Start/Stop’ they roped in Daniel Nentwig (The Whitest Boy Alive) to play the Rhodes and on backing vocals the album features Emma and Mia Kemppainen from the blog-hype-girl-band Le Corps Mince de Françoise.

An art school graduate in Visual Communication, Norman Palm’s work combines sound and image, music, art and design, reflecting on the stereotypes of pop. With his very first single and video he paid tribute to 80s classics ‘Boys Don’t Cry’ and ‘Girls Just Wanna Have Fun’. The videos worked as a gender discourse, contrasting masculinity in contemporary advertisement and historical propaganda, mashed up with YouTube teenagers performing Cindy Lauper in their parents’ suburban bedrooms. With such a striking love for pop it only made sense that Norman try it out himself.

The album artwork is the only part of ‘Shore to Shore’ not created by Palm himself. After his giant book project he handed it over to Parisian graphic design studio Ahonen & Lamberg who designed the cover using a photograph by New York artist Hisham Bharoocha.

In an article in German Spex Magazine entitled “Between Big Cities” Palm is described as a German pop export who’s not perceived as German at all. He is, in a way, City Slang’s Lady Gaga: an international pop artist between art, music and design.

“Bon goût pop (pop of good taste)” declared the Parisian Liberation and we couldn’t put it any better!