Friends Of Mine Festival – final line-up! 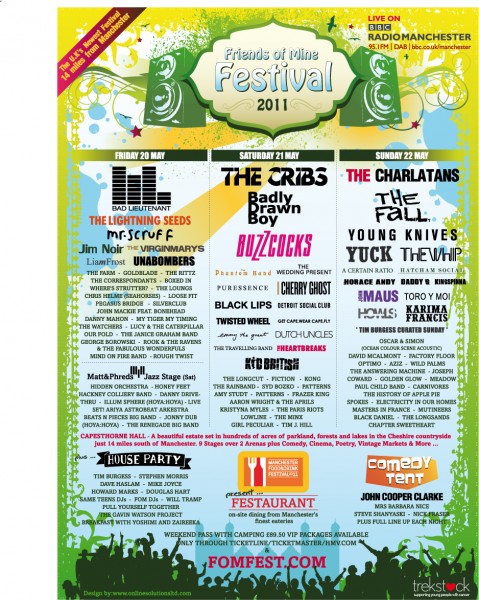 At Friends of Mine, Manchester legends like THE BUZZCOCKS, THE FALL,
Bernard Sumner’s BAD LIEUTENANT and Cheshire’s very own THE CHARLATANS
will meet Manchester’s hot new talent like PATTERNS, THE ANSWERING
MACHINE, GOLDEN GLOW and DUTCH UNCLES. Joining the dots between them are
THE CRIBS, CHERRY GHOST, BADLY DRAWN BOY, JIM NOIR, LIAM FROST, THE
WHIP, MR SCRUFF and many more. And from further afield, there’s an
international line-up of must-see bands including YUCK, TORO Y MOI,
BLACK LIPS, YOUNG KNIVES, and JOHN MAUS.

Aside from the musical entertainment on the Lake Stage, the Satellite
Stage (so named for its views of the giant observatory at nearby Jodrell
Bank), the Big Top Stage and the Bowl Stage, there’ll be a dedicated
tent for stand-up comedy, spoken word and poetry headlined by the bard
of Salford, JOHN COOPER CLARKE and featuring sets from Steve Shanyaski,
Mrs. Barbara Nice, Nick Fraser and more. More culture can be found on
Saturday’s Jazz Stage, with 12 hours of music curated by Manchester’s
beloved Northern Quarter jazz institution Matt & Phred’s. Performers
include Hidden Orchestra, Hackney Colliery Band, Illum Sphere Ariya
Astrobeat Arkestra and Renegade Brass Band.

There’ll be late night goings-on in the marquee run by THE HOUSE PARTY,
who specialise in turning spaces into riotous, themed shindigs. DJs
include TIM BURGESS, the Hacienda’s DAVE HASLAM, Smiths legend MIKE
JOYCE and Massive Attack collaborator HORACE ANDY as well as DADDY G
himself. And there’s a cinema tent showing Manchester-centric movies
Control and 24 Hour Party People plus a host of cult classics and a
special screening of Mr Nice introduced by HOWARD MARKS himself.

Food and drink-wise, you’ll find none of your gristle-burgers here.
Instead, there’s Festaurant, a unique festival food experience in
association with Manchester Food & Drink Festival, bringing mobile
versions of many of the city’s best-loved restaurants, cafes and
eateries to the rolling fields. Plus heaps of additional entertainment,
including science demonstrations from the folks at Jodrell Bank who are
setting up a mobile version of their new visitor centre on the festival
site, complete with giant telescopes. All this is priced at a
super-reasonable £89.50 including camping, and VIP options available for
those looking to enjoy a bit of extra luxury.

Friends Of Mine rose to prominence from the clubnight of the same name
during the boom of DIY club nights in the early 2000s. The first Friends
Of Mine took place in October 2004 in a bar in Fallowfield, South
Manchester. “Little did we know then that by 2008 we’d have a monthly
Liverpool and a fortnightly London FOM running alongside, and that we
would not to go more than four weeks without a Manchester show until
April 2010 when festival planning took over,” says organiser Sam
Gardner. “The ethos for the Festival has come from the same idea as the
original club night: maybe we can do one of our own…”