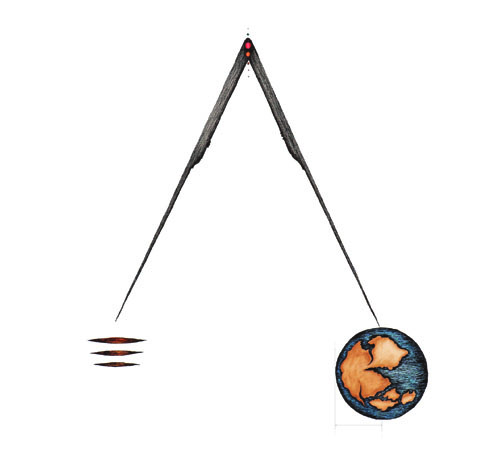 Recent Kemado signees True Widow have marked a May 2nd UK release for their elaborately titled new album, ‘As High as the Highest Heavens and From the Center to the Circumference of the Earth’. Following on from their superb 2008 debut, the Dallas-based trio joins Kemado’s burgeoning roster of exciting heavy music, which also includes The Sword, Saviours and Xasthur.

Over the past two decades, we’ve been bombarded with grunge, with shoegaze, with sludge, with doom metal, with post-rock, with slow-core, with all these examples of loud rock music that reach towards one extreme or another. The sole intent of this seems to be to bludgeon the listener into accepting what they conceive to be a “total sound,” one which makes their effort more valid than the others around it, and by association, worthy of your reverence.

True Widow plays against type. Listen closely to their new record ‘As High As the Highest Heavens…’ and you’ll notice something rare: a band that plays to the notions of the genres mentioned above, one which embodies the best characteristics of each but never repeats something that’s been done. The understanding of space, balance, and method exhibited by True Widow is different enough to avoid the trappings of genres done to death; special enough to revere, and to pull away from memories of sounds that once wore you down.

Big guitar, bigger drums and the biggest bass (played by D.H., Slim, and Nikki, respectively) effortlessly recreate the unending skies of prairie America, where storms blow across with fury, horizons are unencumbered by the choke of skyscrapers and electric light, and the atmosphere pushes you down. A rumbling backdrop of distortion churns away, both behind and within True Widow’s plaintive song structures, but never overpowers it. Across a 50-minute runtime, the nine songs here range from excavated alt-rock anthems (“Night Witches,” “Skull Eyes”) to methodical epics like “Boaz” and “Blooden Horse,” to triumphant bulldozers of sound like “NH,” which splits the difference between dirge and hymn, the instruments staring into the ground while D.H. and Nikki’s voices ascend to the clouds.

Plenty of you may balk at both the length and largesse expressed in the title of True Widow’s new album, but once its powers seep into your skull, you’ll likely find it impossible to doubt the magnitude of what’s at stake here – a band that is singlehandedly breaking rank from accepted genres, and carving its own path into history.