Ungdomskulen are back, and are giving you ten. 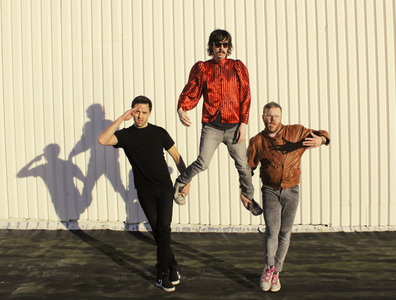 You have bands, and you have groups. A band of brothers and a group of people, if you will. Ungdomskulen are nothing less than a band. A band that have toured the world, signed record deals, ended record deals, had their rehearsal space burnt down and rebuilt again from scratch, but through it all retained their sense of mission, their DIY ethos and importantly, their sense of humour.

Their sense of humour is born from a shared outlook, an ever-growing bond, honesty, experience. And experience in the unpredictable industry has taught the band that fundamental changes need to take place. No going back to the day job though; Ungdomskulen plan to do things their own way.

In 6 weeks, Ungdomskulen wrote and recorded ten one-minute tracks, without any compromise on intro, verse and chorus. The result is a fast-paced, energetic set of songs, drawing inspiration from new wave, dub, blues and box-fresh pop, that collectively form a musical journey you can’t help but need to be a part of. It’s a ten-minute masterpiece that leaves you hungry for more.

Each track will be released individually, every Monday and Friday from May 2nd until June 3rd. They will be free and downloadable via Soundcloud, and supported with a video each time courtesy of Blank Blank Produksjon; Columbian cinematographer Carlos Vasques and Finnish Petri Henriksson. The Berlin-based Blank Blank made the decision to direct all ten videos, looking to form a surrealistic piece interlinked by a common theme.

On June 6th, the band will release a 7” vinyl of the mini-LP, mixed and mastered by Norway’s Jørgen Traen, and artworked also by Petri Henriksson.

There will be release parties in London, Berlin, Bergen and probably Paris. You are invited to become a part of it.

The Pierces ‘Glorious’ The new single out May 23rd