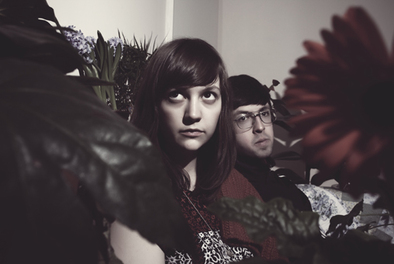 Conquering Animal Sound have announced a remix competition for the new single ‘Tracer’ which is due for release on June 20th. Details can be found here. James and Anneke from the band will choose their favourite remix from those submitted to release as a b-side to the new single.

The Scottish duo head out on the road next week to play some shows in the UK before the Summer festival dates begin, including apperances at Port Eliot and Glastonbury.

BEAR from Alec Cheer on Vimeo.

“By doing a lot of little things well, without making any grand gestures, Glasgow duo Conquering Animal Sound have here crafted a delightful debut album which tinkles and buzzes, chimes and crackles with real promise. It feels like a debut in the senses that one senses there’s plenty more to come – but at the same time, it’s a satisfyingly complete listen, a fully rounded full-length which rewards repeat listens with the discovery of charming new details and nuances.” BBC

“With Kammerspiel, Conquering Animal Sound have simultaneously managed to capture on record the full depth of their creativity and imagination, as well as the inherent beauty of their sound. It is a wonderful piece of work which deseves to be cherished, and gives us far more than we might reasonably expect from anyone’s debut album.” DROWNED IN SOUND 8/10