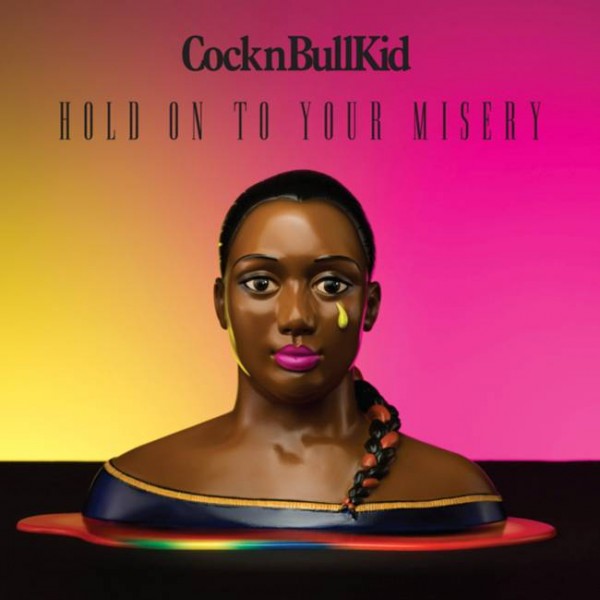 CocknBullKid has made a couple of important transitions recently. First, she’s changed her name, dropping the pronoun (she’s CocknBullKid, not The CocknBullKid). And secondly, she has emerged from a creative cocoon with a suite of bright, breezy and ultra-colourful pop songs that exist at least five giant leaps away from the savvy, autobiographical electro tunes like ‘On My Own’ that got her a slot on Jools Holland even before she signed to Island Records. “The music I made at first was cool, but it was work in progress. There was only so far I could take it. I knew I was capable of more. I wanted to make music that reached people further than E9, or whatever the cool postcode is now.”

It’s been worth the wait. The 25 year old Hackney resident, aka Anita Blay, is in possession of the most interesting, credible pop record of the year. It is a joyful celebration of everything in Blay’s life: the teenage depression; the colourful confusion of her Catholic-turned-Pentecostal upbringing; her Ghanaian uncles and their hi-life band in Accra; and her insistence that her songs should turn negative emotions into high-saturation pop songs that will turn the FM dial kaleidoscopic when they inevitably perform a massive ambush of the charts. Adulthood has lush strings,twinkling marimbas, steel drums and a brass band and an insatiable appetite for incessant hooks. It sounds like Kate Bush, were she dancing on cloud nine and insisting that you dance too. Others are taking note too: single ‘Hold On To Your Misery’ has been championed by R1s perennially on-point Huw Stephens as well as the NME and Popjustice. “I knew I wanted the album to be really musical. Everything now is so minimal and I wanted to make something I could listen to in ten years time. I didn’t go to a gig for a year, I didn’t read music mags and I didn’t listen to anything new. I plugged into The Buggles, Enya, The Beach Boys and The Polyphonic Spree and listened to how they created a sound. And that was it.”

Adulthood was recorded in London, Paris and Stockholm with production from Liam Howe (man behind Marina and the Diamonds and member of ’90s band Sneaker Pimps) and was put together in Howe’s Dalston home studio, surrounded by vintage synths, and in the cosy confines of Snap Studios in North London. Blay co-wrote the songs with a variety of talents, including electronic, eccentric piano man Gonzales who worked on half the songs. There are a couple of songs from Peter Morn from Peter, Bjrn and John and a co-write each from Joe Flory aka Primary 1, Joseph ‘Metronomy’ Mount who produced Blay’s Moshi Moshi-released early songs, and long-time collaborator Mark Tieku.

Anita Blay was born in Clapton, moved to Walthamstow, then did most of her adolescent growing up in Hackney Central. At ten she wanted to be a proper pop star and starting writing primary school songs in her bedroom, and began entering talent shows. She also entered dance competitions, often creating routines around her then-favourite band, Eternal aka England’s answer to En Vogue, and picked up a bronze medal in a national competition. The key moment, though, was when she joined Tribal Tree, the east London youth music project that kickstarted Plan B’s career after he was spotted at their regular industry showcase by 679’s A&R man. “I spent seven days a week down there! You could learn Logic, do vocal lessons, and you learnt to write with other artists. The showcases were great. It was a bit like X Factor, but to 12 people.” She left Tribal Tree aged 20, set up a MySpace and the rest is cocknbull history.

The songs ramp up the positivity. Single ‘Hold On To Your Misery’ is what Blay calls ‘an anti-anthem’. “It’s about stopping putting so much value on being happy. When I’m happy, things start to drop. Sometimes you have to go back to that point when you’re 14 and you think everyone hates you.” ‘Yellow’ is a huge, fairground carousel that swoops and smashes into itself, a beautiful bruise of a song that challenges everyone, including the singer herself, to feel the fear and do it anyway. The eponymous, steel-drum driven ‘CocknBullKid’ was written with Gonzales in Paris (“It’s my way of explaining my name”) and comes with an off-kilter dubstep refix from Birmingham’s numero uno bass don Raffertie; a track that is likely to make it’s own way into the festival mainstream. ‘Stop Your Whistling’ is Blay’s rant against the ’90s diva, despite the undeniable power and quality of Blay’s voice, which echoes and updates the naggingly infectious ‘wimoweh’ chorus of ‘The Lion Sleeps Tonight’. “There’s this weird adulation of people who sing really well. I find it sickening. I like people like David Byrne who can get something across to you, whether they can sing or not. It’s my song against being a diva. Having something to say is more important than being able to do something.” And then there’s ‘Turn’, which until you hear the lyrics, which describe the the tragic death of a friend but sounds like a sweeping, swooping, soar-to-the-sky slice of joyful pop.

Ask Blay about her influences and you’re as likely to hear her talk about The Knife (“Deep Cuts was a revelation to me really weird but really pop”); the entire 1983-1998 Madonna catalogue and Morrissey. “I will never fall out of love with Morrissey. He got me through those awful adolescent years and he could articulate things that a lot of people felt.” And the live shows? “All I’m saying is that there’ll be a story – a cradle to the grave journey. And it will be very interactive. There may even be vogueing”. Fully grown and ready to blow: that’s CocknBullKid, 2010.