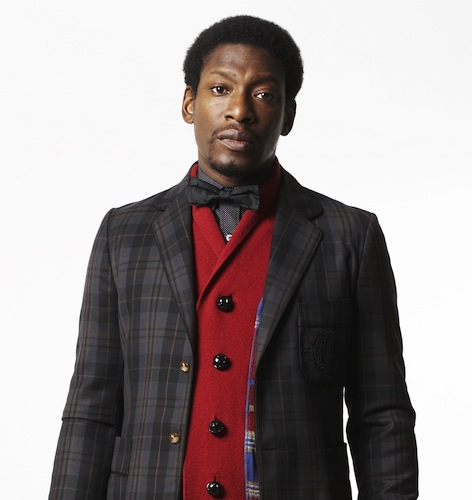 On September 26th (in the UK and Europe, October 11th in the USA) Roots Manuva will release a brand new studio album, ‘4everevolution,’ via Big Dada/Banana Klan. The album is just a few seconds under an hour long, consists of seventeen tracks and covers every style from wonky reggae through pop-funk, street spitting, straight up hip hop, sung ballads and epic death-disco. We think it’s his very best work since “Run Come Save Me.” We’re wondering (whisper it) whether it might be his best album… (sshh) ever.

The album mainly revolves around Roots’ own production and voice, with contributions from Banana Klan stalwarts including Ricky Ranking, DJ MK and Daddy Kope. In addition, on three tracks Mr Manuva introduces talented young singer Rokhsan. Other guests include Skin and Cass Lewis from Skunk Anansie, Elan Tamara and Spikey T. Production, meanwhile, comes from as far afield as Australia, Rodney Smith’s travels allowing him to meet beatmakers and producers all over the world.

Overall, though, the vision remains that of one man. Roots Manuva has honed his craft across four previous studio albums, picking up a MOBO, plus Brit and Mercury nominations along the way. This record, though, represents some of his freshest, most urgent work. Whether castigating politicians or himself, joking about girls or men in love with their computers, ruminating on the void at the heart of “urban” music or bigging himself up, crooning an apology or growling about “loins,” Roots Manuva remains one of the foremost lyricists and musicians of his generation.

The first taste from this epic is already out and about in the form of “Watch Me Dance”. A dirty little funk ditty with its origins in Ricky Ranking’s earliest live performances with the Manuva band, Rodney demoed the track 18 months or so ago and then gave the parts to Toddla T to see what he could do with them. They both agreed that the results sounded more like a Toddla T track than a Roots Manuva track, so that version gave Toddla’s new album its name, but Rodney’s own version is also out and about. To get the world at large in the mood for the record to follow, we’re offering the chance to download Roots Manuva’s version of “Watch Me Dance” for free.

Is “Watch Me Dance” typical of the album that follows? No, it isn’t. This record is so varied that we couldn’t really pick a track to represent it. Just treat is as representing one facet of the many facets of a great recording artist…

Heights – ‘The Lost and Alone’