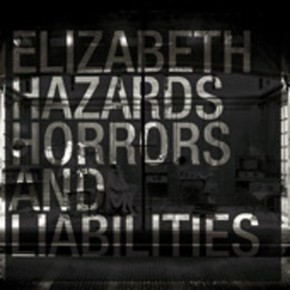 After four years of silence Elizabeth are back with sophomore album Hazards, Horrors and Liabilities. Produced by Eric Mosher in well-known Warehouse Studio, Vancouver, the album was recorded on the George Martin’s almighty Neve console that gave the light to Sex Pistols’ Never Mind The Bollocks.

Twelve tracks of pure indie rock ’n’ roll introduced by the superfluous intro First Excommunications. Columns And Arrows seems the never written fourteenth song of Bloc Party’s Silent Alarm. The album flows smooth and bump-less through the melodies of Death of Plato and its Cure-like guitars and through the Clash-esque ska of P.O.U.M.. After the unnecessary mannerism of Quintum Novembris, the punchy refrain of Cassius Clay explodes its blank shot.

Although reassuring with its already-heard sound, that ranges from the 70’s of Mick Jones until the gorgheggio’s of Kele, Hazards, Horrors and Liabilities fails in showing any sparkle of originality and fades away before its own end. We can surely stand the reigning revivalism of the Noughties, but not its pantomime. Shame, because this band has loads of talents, and we’d be absolutely glad of beg our pardon with Elizabeth’s third album.
Author: Lorenzo Coretti

Ben Howard is pleased to announce details of his debut album this Autumn.