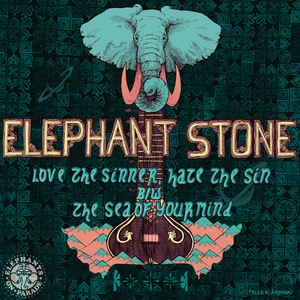 As a preview of their upcoming sophomore album (to be released spring 2012), Canada’s Elephant Stone will be releasing a two-song digital single on September 19th (UK) and 20th (rest of the world). The lead-off track is the 12-string guitar symphony of “Love the Sinner, Hate the Sin” b/w the 8.5 minute psychedelic opus “The Sea of Your Mind”. A free download is available at www.elephantstonemusic.com.

Elephant Stone is the brainchild of bassist/sitarist Rishi Dhir, a founding member of Montreal pop/psyche veterans the High Dials, and sitar player for basically every outlaw psyche band out there (Black Angels, The Earlies, Hopewell, Brian Jonestown Massacre, The Soundtrack of Our Lives).

In 2009, Elephant Stone released their debut album, The Seven Seas. Perfectly melding Rishi’s obsession with the perfect pop song and the trippiest raga, The Seven Seas was warmly embraced by the global indie-scene and long listed for the coveted 2009 Polaris Music Prize in Canada. 2010 saw the release of The Glass Box EP, a 5-song suite of inspired power-pop/psyche classics, a supporting slot on the Brian Jonestown Massacre’s North American tour, and an inaugural tour of Europe with sold-out dates in London and Berlin.

Elephant Stone are currently planning their biggest tour yet that will take them to California, Iceland and the UK.

The Pirates – Shakin’ With The Devil (Best of)