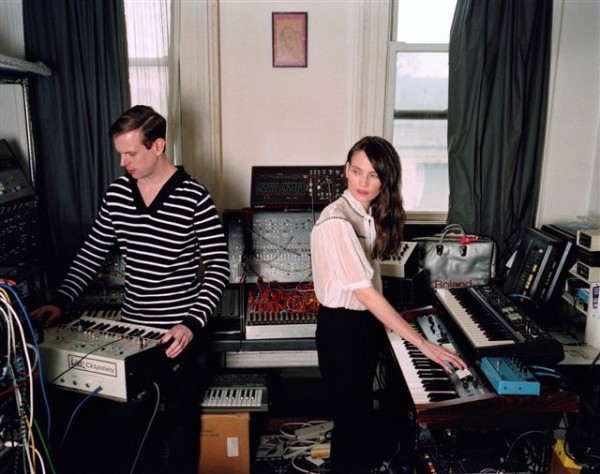 Xeno & Oaklander are delighted to announce a short run of live shows in the UK next month, including two shows with John Foxx. These shows will see the much-celebrated duo perform tracks from their new album ‘Sets & Lights’, which will be released on 17th October via Wierd Records. Dates are as follows…
OCTOBER//
27 // LONDON , XOYO – support to John Foxx (Artrocker Presents…show)

A portrait emerges in the video for the lead single from Xeno & Oaklander’s Sets & Lights: one of two separate yet unmistakably intertwined individuals.  Liz Wendelbo gracefully ascends and descends a menacing staircase while Sean McBride stands patiently in the ambiguous, blurred distance.  The time is warped, the architecture is unfriendly, and the relationship between both people and their physical environment is made anxiously questionable.  And yet, dominating the proceedings is an air of exoticism and pervasive sensuality in the face of what feels like an impending violent event.  The collision of these tensions, atmospheres, and personas is soundtracked on this latest offering from Wierd Records.

Xeno & Oaklander create a universe where technology is beautifully timeless, where electricity pulses with vigor and effortless finesse.  The standard meaning of “ghosts of technology,” with its equally standard images of looming architecture and lifeless shells of machines, is rendered obsolete.  Nimble electronic melodies sing, stretch and glow like elegant apparitions.  Grandiosity and restraint live harmoniously side-by-side, just as the dual vocals of McBride and Wendelbo weave in and out of one another, sometimes an isolated croon and sometimes a layered texture.  From the title track, with its thumping robotic heartbeat to the orchestral (yet still danceable), transportive instrumental “Italy,” Sets &Lights is a record that invites the listener to become fully immersed.  Tracks like “Blue” and “The Staircase” are punchy sing-a-long industrial pop songs while “Desert Rose” uses lush synthesizer textures to rival the most forlorn folk balladeer.

The interplay between McBride and Wendelbo yields very little that is conventional, but quite a lot that’s alluring.  Theirs is an enigmatic combination of various sensibilities that nevertheless produces a singularly focused vision.  McBride sings, “the theater, the stage, the sets thelights, masking some grand delight.”  This is a record that makes the most of the power of electronic instruments to set a scene, to evoke intrigue, and to invite the mind to wander into those shadowy places where grand delights hide.

Cradle Of Filth to release mini-album