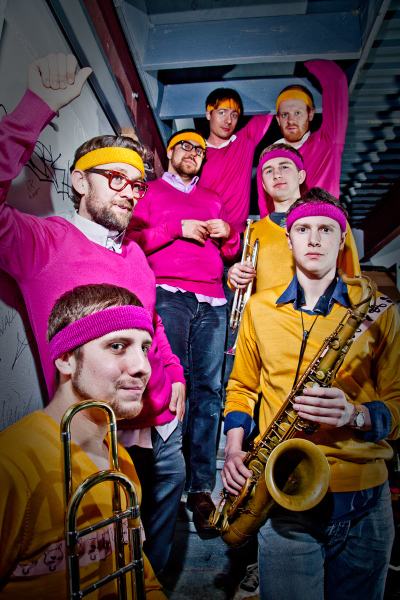 New Yorkers Sport of Kings will this Friday 18th November grace The Wilmington Arms for a one-off London show.

Sport of Kings is a combination of members from far flung places and music of different styles. Songwriter Richard Kelly moved to Brooklyn, NY from Dublin, Ireland in 2006, where his band Capratone received much acclaim and airplay and released an EP and LP on Irish independent labels.

Taking a break from playing music, Richard set up ‘Scientific Laboratories Music Studios’ in Brooklyn, attracting bands such as Yeasayer, The Ravonettes and Au Revoir Simone. Playing his songs in a 4-piece band with bass player Ben Haberland, the departure of the second guitarist led to the decision that brought about Sport of Kings.

At the time, the music was catchy, clever indie rock along the lines of Pavement, Modest Mouse, and others, mixed with 4-part Beach Boys style harmonies. From Haberland’s suggestion that the guitarist be instead replaced with a keyboard player, it was decided that the keyboard in question should be a Fender Rhodes electric piano, reflecting their love of Steely Dan and smooth 70’s rock, much of which features the rhodes. Colorado native Matt Beckemeyer joined in that capacity in early 2009.

So happy was everyone with the new musical direction, which gave the songs a totally fresh feel, the band agreed to take the fusion of their original sound with 70’s smooth rock to its natural conclusion, in the form of a three piece horn section. Trombone player Mac Walton and his brother, Tenor Sax player Jas Walton line up with Trumpeter Billy Aukstik. The new lineup was cemented by the addition of NYU Jazz School prodigy and Body Language drummer Ian Chang and for good measure, Chris Hembree on Moog and debuted in early 2010 and has been receiving rave reviews. The immediate future sees Sport of Kings release a video for Free Jazz together with the Logic House EP, with a full length record in Jan 2012

So happy was everyone with the new musical direction that the band agreed to take the fusion of their original sound with 70s smooth rock to its natural conclusion, by adding a three piece horn section and another classic keyboard to proceedings, the Moog synth. The band debuted in early 2010 and have since been receiving rave reviews in the US. You can see why by watching their quirky video for single Free Jazz at

The immediate future sees Sport of Kings release an EP, Logic House, on 25 November with a full length record due in Jan 2012.