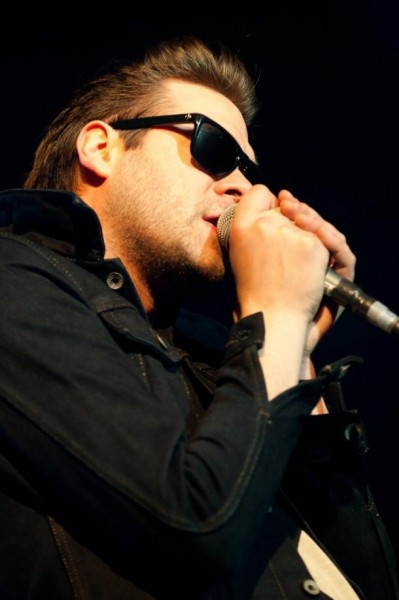 Kasabian kicked off their European tour to promote Velociraptor!, their critically acclaimed fourth album, definitely a milestone for the band success.
They got into Milan on a cold Sunday, but they set the crowd on fire in 30 seconds.
The Alcatraz sold out 40 days before the gig, clear sign that Italian people eager for them (in fact two dates were added a couple of days ago, Rome and Padova on 24th e 25th February 2012), the band felt it and was ready to give them a great show.
After the opening by Chaos Surfari, a five-piece band from Milan, who played half an hour of good, but a bit already listened rock, the venue was a unique vibration of people waiting for the lights to be turned off.
When the moment arrived and streams of red lights enlightened the stage it was a delirium.
The gig started with Days are forgotten, an unusual choice for the band, during the last tour they kicked off with a B-Side, therefore I didn’t expect to hear the heavy rotation single as the first track.
I suppose they wanted to play it safe and strike the crowd immediately, in fact the following tune was Shoot the runner and the Alcatraz became a sea of waving people, who didn’t stop until the first break, the 70s rock of Where Did All The Love Go. The first block of songs, also including Velociraptor and Underdog were well got into shape, while some new ones like Re-Wired or I hear voices, still need to find their “live” identity, the band performed them perfectly, but they have to give them something peculiar that will make them essential. ID is always estranging, with green lights and echoed vocals by Sergio and Tom, it’s a classic that can’t be missing in their setlist, it’s the right moment to lose yourself into music. They incresed the use of echoes and reverbs, especially on Sergio’s vocals, creating a confusing and hypntoizing effect, good choice that could be useful to hide some imperfections, but this is not the case, he sang really well.
Also he danced like a monkey on a tree, he couldn’t stand still, visibly excited by the audience acclaiming his name in Italian.
The big surprise was I hear voices, I read the setlist of previous dates and I thought it was the time of Man of simple pleasure. But the most tacky song (it’s not an offence, because I like it, but that’s a fact)  introduces itself with a massive 90s sound, it was welcomed by the audience who sang along and appeared quite happy of this choice.
After classics like Take Aim (embellished by a special intro, the Inno di Mameli, the Italian national anthem, played by Gary Alesbrook’s trumpet), Club foot and Empire, the moment of La Fee Verte was really special. I think it’s a perfect song, it’s more charmy performed live , Sergio can sing it with a mix of “highness” an wantonness, while Jay Mehler puts little guitar gems on it, like on Pulp Fiction, his guitar solo shaked people’s ass, while the trumpet filled the venue with a western movie atmosphere.
Goodbye Kiss was a back to the 60s, the kind of song you don’t expect from Kasabian, it’s the rabbit out of a top hat, you don’t know where it comes from, but you like it.
L.S.F closed the set leaving the audience singing the final “lalalala” until they came back for the encore.
Swithcblade Smiles is the most powerful live song ever, with a play of lights creating a  rave atmosphere, together woth raw screams and heavy guitars, that’s the kind makes you say “wooow”.
Vlad the impaler is the worthy follower, a sort of Switchblade’s daddy and Fire is the last, the one you don’t want to hear, because it announces the end of almost two hours of pure and good rock music.
No doubts that the Velocraptor! tour will be a huge success, the premise to a summer full of headlinings.