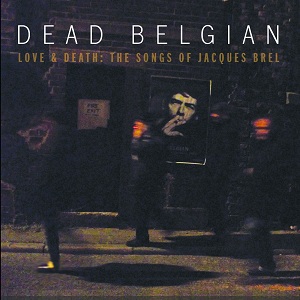 There’s little more satisfying than hearing a band take another artists work and make it their own but still staying true to the original artist. This is something that Dead Belgian have done with Jacques Brel’s music.
I’ve often thought that covering songs is a brilliant idea as it helps raise the profile of lesser known songs. Before this, I’d never heard of Jacques Brel or Dead Belgian but thanks to Dead Belgian’s work, I can’t wait to find out more about them both.
Dead Belgian have made the songs sound playful – I can imagine dancing to them at a French café somewhere. In fact, the songs instantly send me to France. They clearly, as a band, have an immense amount of talent between them – something that’s clear in the vocals and the instrument playing.
This is the kind of music I’d listen to when I want to escape the dull city of London for a while. You’re instantly transported to another time and place – a much happier one, at that.
It’s hard to describe the songs as best they deserve. There’s something about them that just fills you with a sudden warmth and the desire to dance or roam the back streets of France. Maybe that’s just me, actually. What I can tell you, however, is that Dead Belgian have a new fan in me. They’re incredible and have opened my eyes to a style of music that I’d perhaps never have known about were it not for them.
The songs aren’t the catchiest I’ve ever heard, I won’t lie, but the fact that they’re so upbeat and happy makes that okay. The 4-piece have enough talent to forgive them for the lack of catchiness – besides, who cares if a song is catchy so long as it’s an incredible song overall?
If you’ve never heard of Dead Belgian, I definitely suggest checking them out. They’re incredible.

Finalists prepare for Live and Unsigned National Final at The O2!