People Like Us & Ergo Phizmiz – The Keystone Cut Ups 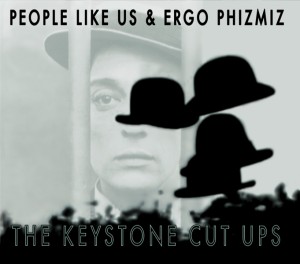 People Like Us and Ergo Phizmiz premiered their experiemental project “The Keystone Cut Ups” at the Berwick Film and Media Art Festival back in 2010. Since then the interest and curiosity amongst art, music and film lovers in this project has only grown and grown. To meet with this expanding interest Illegal Art is releasing The Keystone Cut Ups on DVD along with the music as a stand aside digital download so that a greater audience can experience this avante garde cinematic experience.
The Keystone Cut Ups is a surreal, experimental project that is not afraid to push the norms of contemporary art. Vicki of People Like us explained “This work explores the relationships between early silent-comedy and early avant-garde cinema,” “Using the influence of slapstick comedy on the Surrealists as a starting point, the pieces, through video-collage, combined with a musical score, reflect simultaneously upon the histories of two distinct schools of cinema, whilst producing a series of new works informed by both silent comedy and ‘art’ cinema.”
What is refreshing about this project is that it is totally unique in its nature and it does not conform to any genre stereotypes. Instead, it takes what is honest and true of certain genres and interprets it through a lens of kooky experimentalism. While The Keystone Cut Ups may not be to everybody’s taste, it certainly has a clear point of view and makes a genuine artistic statement which is a brilliant feat in itself.

Me And My Drummer- The Hawk, The Beak, The Prey