Sadie and the Hotheads – Live @ The Union Chapel 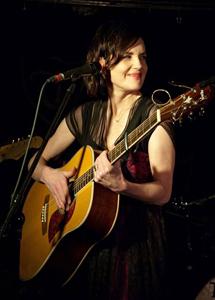 American film, television, and theatre actress Elizabeth McGovern plays the
serene and confident Cora in the highly successful TV series Downton Abbey. As
a singer songwriter she began fronting the band Sadie and the Hotheads in 2008.

Elegantly Elizabeth danced to the microphone. She joked about LA Days, a song
about her past life in Hollywood, a place that she managed to escape from. All
The Time was written about the love for her husband, English director Simon
Curtis . She confessed that she didn’t know How Not To Lose Things and in
Drops Of Rain became a devoted mother watching her children at swimming
galas. In My Debt Collector she sweet-talked a repossession agent with the great
line “I’ve got great legs but as you may know I’ve got a rather big arrears.”

The evening was a warm, fresh and enjoyable mix of blues, country, folk
and rock ‘n’ roll supported by Elizabeth’s lively band of highly professional
musicians. A quirky and mischievous charm emerged and her songs were honest
and unpretentious.

I once interviewed Elizabeth and we shared a silly fantasy about the late Dudley
Moore, who once acted with her. Wouldn’t it be great if he could do a guest slot
with Sadie? “Oh my god. Nothing would make me happier!” she replied.