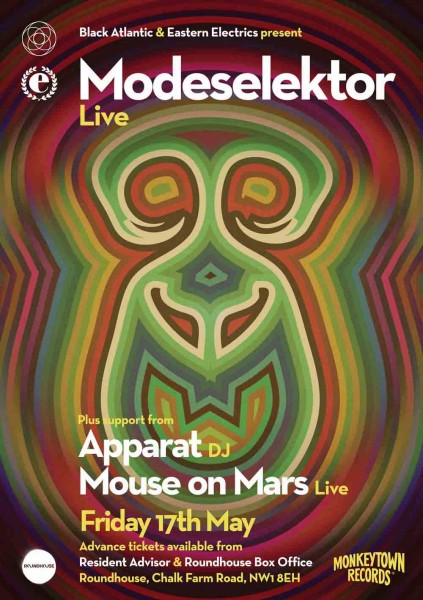 This will be the first and last time they play live in London this year and offers a rare opportunity to enjoy Modeselektor in the stunning surrounds of one of the capital’s most important contemporary spaces – Roundhouse; the perfect environment for Gernot & Szary (aka Modeselektor) to realise the full potential of their breath-taking live experience.

Support comes from close friend and cohort Apparat (ahead of the release of their highly anticipated second album under the collaborative moniker of Moderat, due later in the year) and legendary German electronic act Mouse On Mars.

For more than a decade Berlin has been the undisputed home of techno and Modeselektor have, without a doubt, played an integral part in the development of the city’s culture and sound. What started as an expression of the newly found freedom Germany had begun to experience following the fall of the Berlin wall in 1989, took shape a few years later in the semi-legal after hours parties dotted around the reunited city (where the duo met) and eventually led to the formation of Modeselektor.

Following a series of ground-breaking singles for Ellen Allien’s BPitch Control imprint, Modeselektor have gone on to release three critically acclaimed albums – 2005’s ‘Hello Mom!’, 2007’s ‘Happy Birthday’ and most recently 2011’s ‘Monkeytown’. Their label of the same name is supplemented with releases via 50Weapons (a more specifically techno orientated imprint, featuring works from peers Marcel Dettman, Monolake and Shed, alongside a plethora of international signings) and, of course, they also somehow find time to continue their seminal collaborations with Apparat.

Those with any level of interest in contemporary electronic music will recognize Berlin based Sascha Ring as one of the most prominent forces within the field. Aside from his work with Ellen Allien and Modeselektor, he has produced a series of solo albums that have gradually redefined his contribution to electronica – moving him beyond the standardised template sometimes adopted by his peers into far more cerebral territory.

He is about to follow up his most recent album ‘The Devil’s Walk’ with the release of a composition created to accompany a theatre production of Tolstoy’s ‘War & Peace’ (‘Krieg Und Frieden’), but it is, of course, worth remembering that he grew up on more or less the same diet of illegal parties and techno that so influenced Modeselektor, and with the release of the next Moderat album now confirmed, this will be a chance for Sascha to not just explore his past, but also look to the future.

Completing the line-up are Dusseldorf based electronica outfit Mouse On Mars. Currently signed to Modeselektor’s Monkeytown imprint, the duo released their most recent long player in February 2012 (‘Parastrophics’), following a live preview at Berlin’s Berghain a few months before. With a second mini-album entitled ‘WOW’ released just before the end of the year offering “[a] counterpoint to Parastrophics, with excursions into acid and bass” this will be a welcome return to the capital for this pioneering duo.