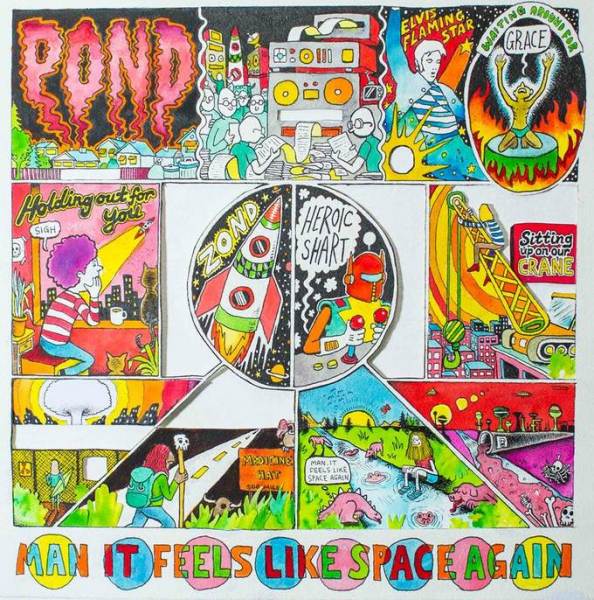 Featuring an ever-changing lineup over their run so far, Pond’s previous albums had the busy sound of a communal approach to arrangement. With the current iteration including only four members, it’d be fair to expect less to be going on in their newer songs…

On the contrary, these guys are still very capable of creating a generous ruckus with the arsenal of instruments and effects they are more than keen to employ. All over their latest release, Man It Feels Like Space Again, there are wavering embellishments courtesy of guitar effects and synths. And with Kevin Parker’s contribution as producer, the presentation of this music is often treated with a demanding array of neo-psychedelic space rock/funk.

‘Waiting Around For Grace’ opens lightly; there are synth strings, ascending and descending vocal melodies and all the sonic paraphernalia needed to create a prototypical sense of floating in space with the light of the heavens reflecting off a distant disco ball. These initial moments preface the album in a way in that it feels like the conception of it’s defining sounds. Appropriately these early moments display innocence and childlike wonder before clearly stating a desire for dance with the entrance of the albums first riff. Without wasting much time, the second track, ’Elvis’ Flaming Star’ jumps into a hand-clapping dance beat that curiously enough brings out the flavours of Damon Albarn or Beck out of Allbrook’s songwriting.

For all the grooves and funk-rock-feels that play to the album’s happening front-cover so well, this release also showcases something of a redirection of Pond’s scope. ‘Holding Out For You’ is the first real slow burner of the album, coercing the listener to force more attention on the vocals for fear of tuning out and allowing the packed, spaced out arrangement flow past ones ears.

The vocal melodies in songs like this as well as Sitting Up On Our Crane’ suggests a that the band isn’t against sourcing influences from the 80s and 90s. More than the bands that are obvious to compare to Pond (and are consequently mentioned in this review anyway), the inspiration here is spread thin across many times. If this album couldn’t have existed with the 60s, the same can be said regarding every decade since then. This can mostly be attributed to the band themselves having written the songs but Parkers’s current tendency towards electronic sounds and hip hop beats also shows up frequently to inject even more of modern music history into this potpourri.

From cover to approach, vocals to songwriting and pretty much everything in this album comes along as solid and authentic but these pro’s ultimately serve towards a sizeable con which is that it’s really hard to not automatically compare this to much of what has come before it. While the likes of Tame, Ariel Pink, MGMT and Melody’s Echo Chamber all knowingly reference earlier and more psychedelic days in much the same vein, Pond seem to suffer slightly from existing in a world where these heavyweights have already made their mark on this type of revivalist music. Having said that, there are many tracks in this most recent effort to encourage rising expectation from the group; ’Waiting Around For Grace’, ‘Elvis’ Flaming Star’, ‘Zond’ and ‘Man It Feels Like Space Again’ all display a strong ability to harness these ingredients into creating an album with a clear progression, both in regards to Pond’s musical canon and along the running length of the album itself. This latest LP presents a consistently strong blend of their previous tendencies with current experiments.

This latest LP presents a consistently strong blend of their previous tendencies with current experiments.