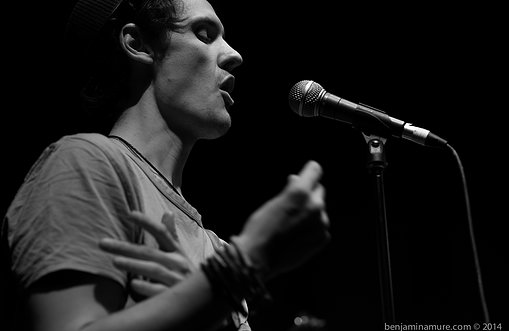 His set began with the first two tracks from the album: the perceptive and exuberant ‘Little Do You Know’ and imaginative ‘Moonchild’. Charming ‘Lonesome George’ presented a sad tale about life seen through the eyes of the famous Galapagos Islands tortoise who lived the remainder of his life as the last of his kind, tragically never finding a partner. ‘Bella’s Coming Home’ captivated the audience with a tearful story about a young girl returning home after having run away.

The fresh and intelligent ‘Shoeless and the Girl’, about of a homeless man, was ethereal but very grounded. Classics ‘Footprints’ and ‘Wild Flower’ had the approval of Wayne Shorter for inventive lyrical adaptations of his compositions and producer Giazonne Reyes helped contribute to these lyrics.

Theo is an original and natural storyteller who often changes his pace and style, taking unpredictable twists and turns with his music. He’s fun, amusing and confident with a distinctive voice and a swinging, dedicated band. This was a quirky, exciting and vibrant set from a fine group of musicians.