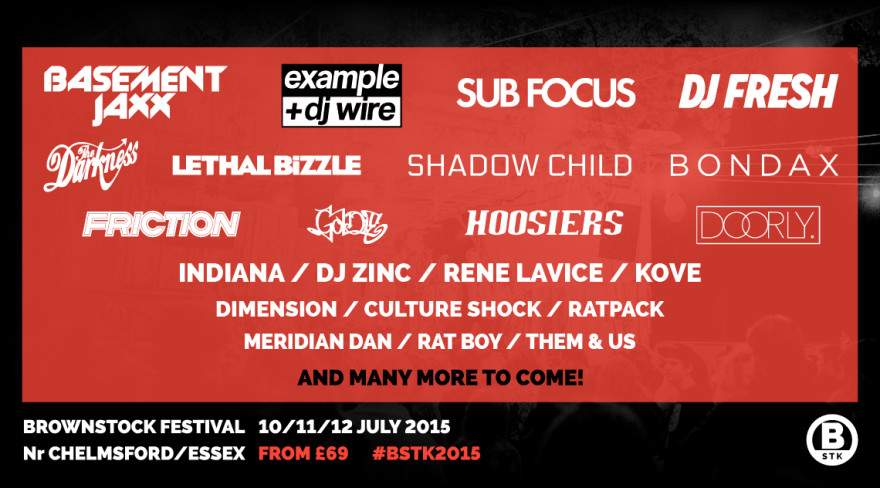 Essex’s best small festival opens its doors in less than 3 days – and with headliners like DJ Fresh, Basement Jaxx and Example with DJ Wire, we’re expecting it to go off.

Now in its 10th year, the Brown family’s own festival has played host to the likes of Pendulum, Nero and The Fratellis in recent years. It started off as a private family event in 2005, and the family were granted an official entertainments license by Essex County Council in 2009. With performers like Ms. Dynamite and Example, 2011 was the year that Brownstock really came into its own and became a real contender as a UK festival.

Amongst the wealth of acts performing this weekend and aside from the headliners, us folks here at AAA Music have kindly put together a list of musicians that we really feel cannot be avoided. Here goes…

This Leeds-based duo started on their rise to the top in 2010 after collaborating with DJ Fresh on debut album hit “Lassitude”. Kanye’s hit “Bound 2” spawned a Sigma remix using the popular chorus sang by Charlie Wilson. Released in April 2014, it was a summer juggernaut – inescapable, but then most of us were pretty happy with its extensive play. The follow-up “Changing” featuring Paloma Faith and co-written by Ella Eyre was another absolute banger, and their credentials being what they are, these boys are sure to deliver.

No matter what you may say, you absolutely loved “Worried About Ray” back in 2007. Much like loveable rogues The Wombats, these guys had their peak in the year of punky pop, and frantic twangy guitars became the soundtrack to our teenagehood. Unfortunately, they never quite achieved the same popularity with their follow up albums as they did with the debut, but are you telling me you don’t want to hear “Goodbye Mr A” in glorious stereo?!

This guy needs no explanation. But here’s some background info anyway. This Surrey sonofa made his name as one to watch after the release of “Rock It” in 2009, and producing Example stalwart “Kickstarts” set him up as a well-respected producer and DJ. Other big tracks include “Out The Blue”, “Tidal Wave”, “Endorphins” and Bloc Party frontman Kele Okereke featured “Turn It Around”. Having seen Sub Focus’ live set a couple of years ago at Parklfie, I can safely advise you not to miss this.

Basement Jaxx are quite similar to Fall Out Boy.

…In that you wouldn’t recognise their songs from the titles. HA, got you there.

But seriously, if you read about the songs “Red Alert” or “Jump N’ Shout”, you wouldn’t necessarily be able to place them straight away. But if you read “the Basement Jaxx song where it goes ‘…and the music keeps on playing on and on…’, you might have a better idea. Basement Jaxx are prolific throughout many genres and generations, and have had highs and lows – they headlined Glastonbury in 2005, arguably one of the top 5 music festivals worldwide, but then supported Robbie Williams on a tour the very next year. Anyway, you’d be a fool to miss them.

Only a handful of artists can say that they actually founded a music genre. And although I personally am a bit unsure as to what “super sharp shooter” might entail, credit where it’s due. His best known song is probably “Wile Out” featuring the legendary Ms. Dynamite – a great track. Any DJ set that can mix hip-hop/reggae with house/drum and bass at a music festival is bound to be worth listening to.

So there you have it. If you think we’ve missed an important One To Watch this weekend, do let us know (in the comments?)

Final tickets are still available – you can purchase them from here…