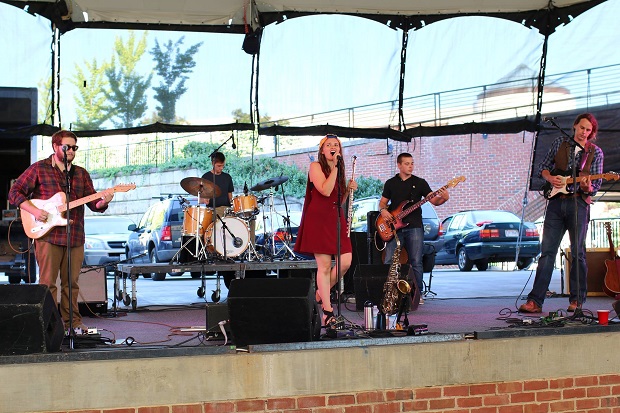 If you ever happen to go through the little Charlottesville, Virginia, make sure to take a break there and enjoy its vibrant musical scene. Besides the many live jazz sessions throughout the bars of the city, in summertime you will be able to enjoy free open-air concerts as part of the festival Fridays After Five. This year is the 28th edition of this free event presented by Bud Light, and lasts no less than five months straight, from April 17th to September 11th.

Charlottesville’s nTelos Wireless Pavilion, where it takes place, makes up a very pleasant venue: under a white marquee protecting the cheerful crowd from the sun, great patches of grass all around and a bunch of tables and chairs spread in front of the stage were at the disposition of the spectators. The overall mood on this warm Friday of July was very convivial, people of all generations chatting, eating and dancing happily in the spot left empty in front of the stage.

Gina Sobel & The Mighty Fine were loudly cheered while they accorded their instruments. Indeed Gina lives in Charlottesville, so she is quite a star in this town; the reunion was all the more an event that she had been away for a little while, travelling as far as New Zealand. Now back in the US, she and her rock band started with shows in Virginia, before proceeding to Washington DC and New York, and the state of Pennsylvania later on in August.

In this band Gina sings, and plays the flute, bass flute and saxophone. She is also involved in a number of other groups as a solo artist, and leads a jazz quartet, the Sobel 4tet. The other members of today’s group, those “Mighty Fine” are of the same stuff: guitarist and vocalist David French, who has a pronounced country feel, other Florida-born guitarist Ryan Lee; and bassist Simon Evans and drummer Pat Hayes who both play together in another jazz band. Gina likes to describe this band as “jazz musicians who play rock music”, and that is indeed what the band is in a nutshell.

This evening’s concert was a very prolific one for them: they played no less than 21 songs, about half of them coming from their album released last December, Burn Off the Dust. They opened with ‘Flight Patterns’, a runnaway-like, fast-paced break-up song. ‘Shugaslam’ , played a little later, was a lot alike except for its British rock vibe during verses, in an Arctic Monkeys style. Next came ‘It Could Be Better’, a heavier blues rock kind of song, in which Gina at the saxophone and David at the guitar made up an enjoyable question/answer dialogue. ‘Chroma’ followed, beginning with start-and-stop patterns giving a nice colour and structure throughout the song, which slowly built up a somewhat cool Californian rock groove.

‘Radio Tune’ on the other hand had a more nostalgic mood, with only suggestive Latin influences in the rhythm section and displaying an inventive change of chords. On the slower ‘Sea of Love’, quite like ‘Road Song’ which was played further on, Gina showed how comfortable she was at improvising flowing phrases in various styles, all the while remaining with a very much jazz background. The song slowly built up in intensity, just like a lover’s feeling building up within him/her. This band has just this right blend between earnest lyrics that anyone can relate to, good jazz, funk and rock improvisation parts from everyone in the band, and a dynamic energy to link it all.

There was also a good amount of country here and there in their tracks, like in the upbeat ‘Dig’ – which the people dancing in the crowd were enjoyed very much. David sang on this one, while Ryan on electric guitar sounded at times like Joe Satriani on his ‘Always With Me, Always With You’. The more melancholic ‘Continental Divide’ was the most jazzy song so far, as much in Gina‘s saxophone playing as in her singing, while choruses remained very rock. It alternated between slow verses and more heavy choruses. Finally the country-like ‘Hold On’ gave people a last good feeling right before the band’s 20-min break.

They came back with style on ‘Funky C Funky Do’, and other funky tracks like ‘Double D’ and ‘New Dave’ later on, with an interesting rhythm section for the former and Gina playing a noticeable smooth jazz solo in the latter. The slower ‘Again and Again’ displayed a darker side to Gina‘s flute playing, accompanied by a fitting simple and discreet triplet guitar accompaniment. Then came the 90s blues rock ‘Cold Tea Blues’, followed by the gospel ‘Wish I Knew How’, David leading from the start – Gina‘s jazz influence was the most vivid on this flute solo.

‘Pockets Full’ was one of the highlights of the concert. Starting quietly, the start and stop pattern from the bass and drums nevertheless attracted one’s attention and prepared one’s ears for the coming inspired bass flute solo from Gina, while Ryan sang an accompaniment in the background. That kind of “gotta move on”, “not looking back” track displayed some cool ska influences – at least in this live version, contrary to the CD’s. This piece was not at all flashy, yet had all the ingredients to make its nostalgic feel easily relatable, and its chord changes and suite of instrumental parts made it an overall very well constructed song.

‘Ghost of the King’ then gave a slower and more country version of something sounding like Green Day‘s ‘Boulevard of Broken Dreams’. One could feel very well the despair as much through the melancholic music as in the lyrics: “This town’s got dust in its eyes, can’t see past the hills”, “There is something wrong here”, “Screaming to the dirt”. The following ‘Thursday Can Be Lonely’, contrary to what its title suggests, did lighten up the mood with its fast-paced funky sounds – ironically then, people were very eager to dance together on this track. Finally ‘I’ve Got a Feeling’ wrapped the concert up with yet another upbeat mood, leaving people asking for more – “encore, encore!”; but the musicians had really earned their rest, and retired to their van followed by a crowd’s applause.