Any festival can cater for a wide variety of all music tastes, but when it comes to festivals that can play into the variety that there is to be found in just heavy music, Hevy Fest has hit the nail on the head. With the day’s proceedings beginning in the wake of a predictable British downpour the day before, the weather turned out to be lovely as the festival kicked into gear.

The first of the acts caught on the main stage was Chon, a band who was stylistically very fitting for the weather – the melodic arpeggios of the guitars filled the atmosphere with this feeling that the weight of yesterday’s downpour had been lifted, and we could breathe a sigh of relief and relax.

Next we had Endless Heights over on the third stage, who are arguably Australia’s answer to band’s like Hum, and their melodic hardcore counterparts, meant for a sound that fits nicely together, neither being too over bearing or underwhelming. Singer Joel had a fantastic voice and great energy onstage. The band deservedly have the sonic ability to take their music to more people. Lets hope this happens in time – they’ll have better chances here in the UK than back home, as capturing a large audience there is like winning big with Australian sports betting or the lottery.

Back on the main stage was Black Peaks, a band whose sound you can’t quite put your finger on, but this what this festival is all about: bringing bands and fans together from different corners of the heavy music world. Vocalist Joe had a very infectious way of presenting himself and the band’s music onstage, and you couldn’t help but watch and feel involved in what was going on.

On the second stage we had one of the festival’s highly tipped bands, Creeper, who have been working tirelessly since their inception a year ago. Having already made waves in the music world, going from one tour to another, and now on the verge of releasing their next EP, The Callous Heart, there seems to be no stopping them. Their performance was nothing short of mesmerising. In fact, it was quite like a theatrical performance, with vocalist Will Gould moving like an acrobat and the crowd eating out of the palm of his hand. You could definitely feel something special happening in the room during this performance – the band has become tighter and the crowd was unrelenting. There is every possibility that this band could become as popular as My Chemical Romance, whom Creeper are not too dissimilar to.

Back to the main-stage was Hacktivist, probably one of the more unique bands of the weekend, bridging sounds of down-tuned chugging guitars, beats and rhymes not too dissimilar those of nu-metal. The band made for an interesting spectacle and you could be forgiven at first glance for misunderstanding where they are coming from, but as their set wore on it became more apparent how much fun they are to listen to and watch.

After a short break at the main stage, Touché Amoré arrived to a roaring audience, with the band revving up with their song ‘Amends’ of their second album Parting The Sea Between Brightness and Me. The crowd loved every moment of it and the weather ultimately helped sustain and boost the crowd’s spirits. One minor critique would have to be that whilst the band played a terrific set, the impact felt a little underwhelming considering the size of the stage, and distance between the band and crowd, but the band bridged this gap quite well when vocalist Jeremy jumped into the crowd to finish off ‘Honest Sleep’. 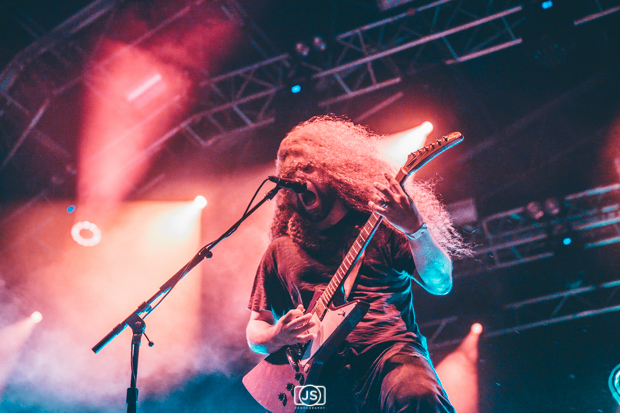 Back on the third stage was Landscapes, a band who have been working hard since their first EP Reminiscence back in 2010, and have since released ‘Life Gone Wrong’, which ties anxious fans over like myself until their second full length. Hardcore – or melodic hardcore – is redefined again and again, but Landscapes, have crafted a sound that is both relentless and brooding with angst, but is cathartic, and the band’s set defined that perfectly. Shaun, the vocalist, took any opportunity he could to join the crowd and they responded by giving every ounce of energy they have.

After being recommended by numerous people, I headed to the main stage to catch Protest The Hero. What struck me the most was the technical ability of the band’s musicians and how their intense precision looked like it came as second nature to them. As a musician myself, it is moments like this when you wish you were just as technically gifted, but alas, I just had to stand and admire the craftsmanship.

This weekend’s festival had too many bands to count that I was excited to see. One of them was Stick To Your Guns, a band who have gone from strength to strength with each release. Their latest full length Disobedient packs a huge punch, and is superb lyrically – the vocalist Jesse is truly inspirational and in a live setting the band are every bit as on form as you’d hope. Unfortunately, the band didn’t draw as big a crowd as they deserved, but that did nothing to extinguish the flame – it burned and burned until the last breath.

After five years out of the spotlight, Fightstar are back, and the crowd here to watch them tonight is testament to how much people still care for this band. After a short delay, the band came onstage to a rapturous applause, and the looks on the band’s faces said it all, with smiles all around. Their set, much like their other recent festival appearances, represented every single album in their ten-year career, and the crowd responded to every song extremely well. Fightstar, you’ve been missed.

Tonight’s main stage headliner Coheed And Cambria chose to play their second record, In Keeping Secrets…, in full, to pay homage to the 12 years that it has been since its release. For a record which stylistically shifts into different gears compared some of the other bands who had graced the stage today, the crowd were in awe, and it was quite something to see so many people enjoying a cohesive effort of an album after so many years. Once the record was over, the band took a break and came back to perform a few more tracks, one of which is a new song called ‘You Got The Spirit, Kid’, a song that is quite a contrast from what we have seen in the past from the band – it’s stripped down in a very straightforward, catchy pop song sort of way. The song sounds different and I’ll be waiting with anticipation to find out whether it’s a sign for what is to come.

SONS OF KEMET – In Memory of Samir Awad