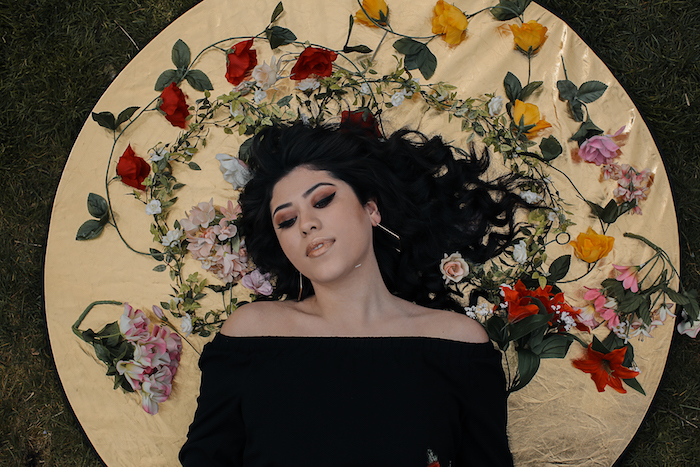 Hey! My name’s Tara Flanagan. I’m an up and coming Pop Singer/Songwriter. I come from a lovely little town by the South Coast called Poole, in Dorset. I’m half Filipino and half Irish – and mega proud of both! I’ve just finished University at the Academy of Contemporary Music where I was pleased to graduate last month with a First Class BA (Hons) in Music. Now I’m ready to hit the music industry hard!

I’ve always had a love for music. I was part of choirs when I was little and from a young age I was a pop fanatic. I adored Britney Spears, The Spice Girls, S Club 7 etc. and so I think that’s where my love of pop music began… I was a very shy kid, so I really felt that music was the outlet that helped me to gain confidence. Then the more I did it, the more I realised my undying love for it! As I got older, I began to explore different types of pop and how creative you could be with it, which inspired me to then create my own. I got a guitar when I was 13 and taught myself some chords and that’s when I started songwriting. A couple of years later, after entering some singing competitions, I then went into the recording studio and started creating my own sound. Now I am obsessed! I love experimenting with sounds and forming something new and personal to me.

This year I was super excited to release two new singles. In May I released ‘Let Your Guard Down’, which I produced with Harrison Perks in Bournemouth. I then released ‘Tear Apart’, my latest single, in May, which I produced with Max Smith in Guildford. Both really awesome Producers who I loved working with. I was particularly proud of releasing ‘Tear Apart’ as this was such a personal song to me. I was lucky enough to create an awesome music video with videographer Edward Palmer, which captured the vulnerability and heartache of the song beautifully. It felt very fulfilling to release these songs as it had been a few years since my last release of my debut EP ‘The Game’ in 2015. It was so great to see and hear people liking my new tunes and to also be able to play them live with my full band around me. It has given me the bug again to keep creating and releasing new music!

The journey of being a completely independent, unsigned artist isn’t the easiest road. Throughout my journey so far, I’ve been doing everything myself – I don’t have a manager, publisher or label etc., which, I think has really made me see just how hard you need to work. You’ve got to be on the ball, trying to book your own gigs, plan releases, arrange promotion etc. all whilst trying to create great content you’re proud of. And I’m proud that I have been able to do that! I’m so blessed for the network I have been fortunate to build around me and for the support I have from those around me. As I continue to work on this journey, I hope to widen my network even more and hopefully find people passionate to support and help me push my music onto the next stages.

I think each artist is always different in their own way and I love that. There are so many creatives out there, but you can find something unique and individual in each person/band. I would like to think that I personally stand out through my performance where I always make sure I give my all, emotionally. Whether it be an upbeat pop song, or a stripped back ballad, I will always 100% make sure I give all of my emotion through my vocals, lyrics and stage presence, to the performance. High energy levels in a performance are important to me as I want the listener/ audience to feel and connect with what I’m singing.

I think that online streaming platforms such as Spotify and iTunes are a great way of up and coming artists to get exposure. It’s often hard to get people’s attention due to there being so much music out there, especially when you are up and coming, but by the power of Spotify playlists, for example, your name can get highlighted and the more times it does, the more new listens you get, the more exposure you get, which then helps to build your fanbase.

However, I understand that for artists, trying to get income from their music, these online streaming platforms don’t always suffice. The stream to payment ratio is fairly low. Physical CD’S and Vinyls are much more beneficial for artists in terms of income. And when people to purchase the music this way, it helps the artist massively as we have to invest so much into the music from lots of different angels – recording, equipment, transport, promotion etc. So if you’re ever at a merch stand, or see one of your favourite up and coming artists posting about selling physical CD’s, I strongly encourage you to go and support and buy one! It goes a long way, especially during the grind of aspiring to be a successful artist!

I know she’s been the talk of the pop market recently, but I adore Billie Eilish. She is such a passionate, strong young woman. I love how honest her music is and how she real she is. She writes banger after banger! I also love Dua Lipa, Florence + the Machine and BANKS – I saw a little teaser on her Twitter that she is releasing a new album in 2019… I CANNOT WAIT! I am so inspired
by strong pop females in the industry.

I feel so motivated and ready to hit 2019 hard. I have some new material that I have been working on, so I am very excited to get that out there and to try and arrange a headline show to go along with it. My aspirations for 2019 are to do more live gigs, all over the UK! Hopefully one day I can do Europe and the world! (That’s my biggest dream). For now, I’m loving what I’m doing and I feel so blessed to be able to be pursuing music as a career. It’s a tough industry but with the support I have around me and the drive I have myself, I feel more motivated than ever to go for it.