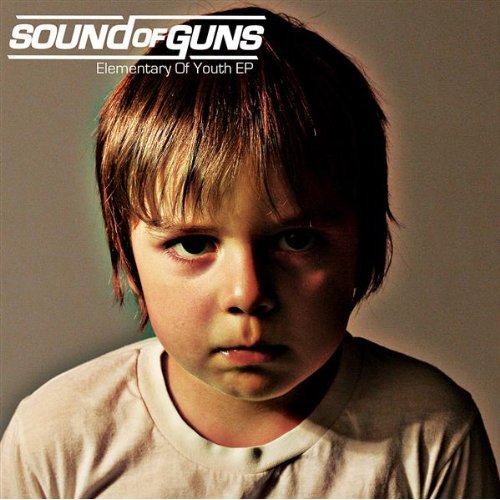 Early on in my career, I was left distinctly underwhelmed by Sound Of Guns’ album. Now they’ve released the next single from aforementioned album: the rock-edged ‘Elementary Of Youth’.

Sound Of Guns are, for all intents and purposes, yet another melodramatic indie rock band who have their sights set firmly upon stadium shows in front of many adoring fans. As such, their music, while trite, is of course incredibly accessible, which isn’t necessarily a bad thing. I would hazard at saying that in fact, ‘Elementary Of Youth’ was one of my preferred tracks of the album, providing a stomping ballad drumbeat with some nifty kick drum happenings underneath a chunky guitar sound constructed of instantly recognisable chord progressions. The vocals are melodic and emotional, and the production is unbelievably smooth without entirely killing the sound. So overall, the elements are good, but what lets the track down is its sense of being rather generic. The chorus soars in a suitable fashion on the back of trembling guitars and multi-tracked vocals. The rhythmic variation in the instrumental promises some flashes of inspiration, but drags the same simple riff around again with little melodic invention once it gets flowing.

The b-side ‘Silent Canon’ offers yet more Killers-esque stadium gradeur. Although the kick-drum dominated stadium rock beat is very much present and correct, the vocals are much more melodic, with group vocals used in the chorus that add to the overwhelming sense of singalong that Sound Of Guns inevitably conjure up. The bridge does offer more in the way of song structure variation than its a-side counterpart, with a slow cymbal beat and shimmering guitars dissolving into a steady bass root note progression before the last chorus draws things to a close.

Don’t get me wrong, Sound Of Guns are for all intents and purposes an acceptably good band. Their only problem is that they aren’t incredibly exciting in either their generic songwriting, or the anthemic but ultimately ambiguous and uninspiring lyrics. If you like The Killers, you’ll most likely find Sound Of Guns’ brand of shining-eyed pop rock to be enjoyable, but they don’t really have enough of an individual voice to avoid the trap of sounding like they’re simply riding the zeitgeist.