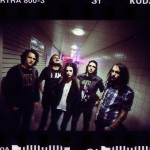 After touring with Young Guns and playing various shows with the likes of Rolo Tomassi and The Ghost Of a Thousand over Christmas, the ever-loud Japanese Voyeurskick off 2011 with a headline tour, leading into the Rock Sound Exposure tour with Dinosaur Pile-Upand The Xcerts.

Their most recent single ‘Milk Teeth’ was released back in November on Fiction, it’s the first single from their eagerly awaited debut album ‘Yolk’, due for release later this year – more details to follow shortly!

‘Yolk’was recorded in a variety of studios across North America, over the spring with GGGarth Richardson (Rage Against The Machine/The Melvins/Jesus Lizard) in an isolated farmyard in the forests of Canada, and mixed by Alex Newport (Fudge Tunnel/At The Drive-In) in the sweat of the Brooklyn summer. Veering from the softest caresses to the most brutal of attacks, you can feel not only the dichotomy between the seclusion of the Canadian wilderness and the strip bars of inner city New York, but the internal psychodrama that makes the record such a visceral experience. The first track to be released from it is ‘Smother Me’ which can be downloaded for free from the band’s Myspace page.

Tour plans for the next few months now look like this: