The Dears sell out first London date, add another. 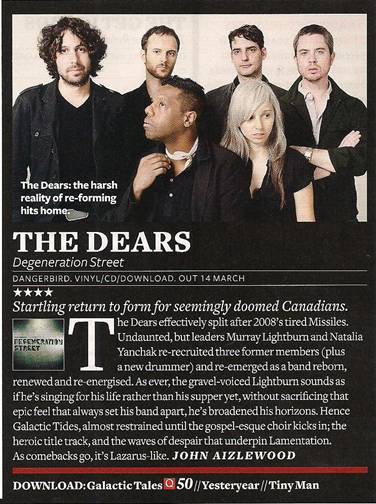 Hailed as “a band re-born, renewed and re-energised” in the new issue of Q, THE DEARS have just announced a second Borderline show in April after the first sold-out within a few days… Upcoming UK live info below…

THE DEARS return in March with their fifth – and finest – album, “Degeneration Street”, a record that delivers the passion and soul that has earned the band the adoration of fans and critics worldwide. From the electrifying nihilist pop anthem “Thrones,” to the star-scraping heights of “Galactic Tides”; from the grimy opener “Omega Dog”, to the Motown sci-fi of “Lamentation”, Degeneration Street is, definitively, THE DEARS.

Alice Gold – Debute single and shows with The Twilight Singers and The Dea... 18 March 2011 | aaamusic