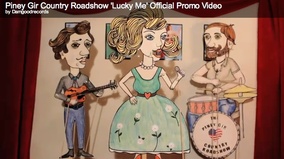 The lovely new video from The Piney Gir Country Roadshow for their recent single “Lucky Me” is now available through the Damaged Goods website (feel free to post!). Country Roadshow guitarist Garo Nahoulakian made the puppets, Jeremy Fowler filmed/edited the video, Jiro Nahoulakian, Garo and Piney were the puppeteers. There is also a ‘behind the scenes – making-of video’ in the pipeline apparently.

Valentines Day sees the release of the second single “Lucky Me” from The Piney Gir Country Roadshow’s latest album Jesus Wept plus it’s backed (in a digital way…you see) with an exclusive UK release of Piney’s desert-rock reworking of the Billy Idol classic “White Wedding” and the original demo version of “Lucky Me” recorded live at Truck Studios with an unlikely band of merry pranksters.

2011 is shaping up to be a big year for Piney Gir… following this single she’s working on songs for the next solo Piney album where she’s headed to LA to work with some exciting guest stars.  This album will be out in the summer plus many gigs, tours and festivals coming up, watch this space!

THE CHARLATANS ACOUSTIC PERFORMANCE OF ‘ONE TO ANOTHER’ AND LIVE DATES!... 10 June 2011 | aaamusic