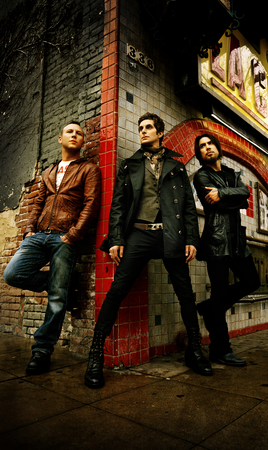 ALBUM SET TO BE RELEASED AUGUST 2011 THROUGH PARLOPHONE

JANE’S ADDICTION yesterday (April 7) gave their fans the chance to be the first to hear music from THE GREAT ESCAPE ARTIST, their first new studio album in eight years.

The band’s singer Perry Farrell, guitarist Dave Navarro and drummer Stephen Perkins are giving away a free download of the final mix of ”End To The Lies” exclusively at their website: www.janesaddiction.com.  THE GREAT ESCAPE ARTIST will be released this August on Parlophone (exact date TBA).

An early, unfinished version of “End To The Lies” leaked last Wednesday (30th March) in Chile when Farrell made an appearance on the “La Ley D Rock” program on the Chilean radio station Radio Futuro, after which the song became an instant viral sensation. JANE’S ADDICTION were in Chile as one of the headliners of the inaugural Lollapalooza Chile, which took place last weekend (April 2-3) in Santiago‘s O’Higgins Park.

For THE GREAT ESCAPE ARTIST, JANE’S ADDICTION are working with producer Rich Costey (Muse, Franz Ferdinand, Interpol), with TV on the Radio’s Dave Sitek on the team. Sitek, best known for his production work on TV on the Radio, Yeah Yeah Yeahs and the Foals, is writing, programming, and playing bass on the album.   The band, with Chris Cheney on bass, will be touring throughout 2011 (see preliminary dates below).

Forming in 1985 in L.A., JANE’S ADDICTION has been firmly embedded in the collective pop culture consciousness for 25 years now. Perry Farrell stands out as one of music’s most forward-thinking and enigmatic frontmen. Dave Navarro remains a veritable guitar god. Drummer Stephen Perkins‘ tribal stomp has also influenced a generation of percussionists. The hugely influential Los Angeles-based band has sold in excess of seven million records in the U.S. alone. When lead singer Perry Farrell created the traveling Lollapalooza festival, it galvanized the alternative rock movement and brought it to a whole new level.

JANE’S ADDICTION have written the rule book for alternative music and culture through a combination of genre-defying classic songs and a cinematic live experience. Great bands break rules, but legends write their own.