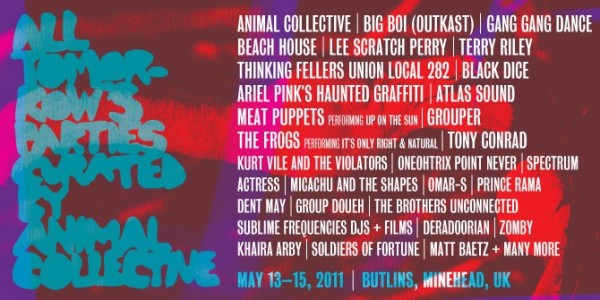 The Animal Collective curated ATP is looming large and we’re excited today to release Volume 2 of the very popular mix tape. Curating and headlining the festival weekend this May, the band have chosen from amongst their collaborators and influences to bring together one of the most diverse and culturally important mixtures of live music ATP has seen in recent times. The event features an array of acclaimed acts including Big Boi of Outkast, Beach House, Terry Riley, Gang Gang Dance, Kurt Vile, Meat Puppets, Ariel Pink’s Haunted Graffiti and The Frogs and many many more. Tickets on sale now via www.atpfestival.com

As previously announced we will be discussing Siddhartha by Herman Hesse at the weekend’s ATP Book Club. Penguin have kindly donated several copies of the book so anyone interested in participating in the book club who hasn’t read the book yet should email atpbookclub@gmail.com with their booking reference to register their interest and claim a book. Please include your address, or better yet whether you will be attending one of our upcoming shows so we can hand you your book in person.

We also have a prize pack of 5 books courtesy of Ten Speed Press and Penguin including Mycelium Running, a manual suggesting growing more mushrooms may be the best thing we can do to save the environment, The Story of the Stone (Dream of the Red Chamber) a rich, magical work setting worldly events within the context of the Buddhist understanding that earthly existence is an illusion and karma determines the shape of our lives, Les Chants de Maldoror, one of the earliest and most astonishing examples of surrealist writing, hailed by the twentieth-century Surrealist movement as a formative and revelatory masterpiece, The Essential Rumi, exquisite renderings of the 13th-century Persian mystic’s words into American free verse by Coleman Barks capturing all the “inner searching, the delicacy, and simple groundedness” that characterize Rumi’s poetry while remaining faithful to the images, tone, and spiritual message of the originals and of course Siddhartha, the classic novel by Herman Hesse that deals with the spiritual journey of a boy known as Siddhartha from the Indian sub-contintant during the time of the Buddha.

To enter to win these 5 books, you must be attending the festival and correctly answer the following competition question via email to atpbookclub@gmail.com :

Question – Which Hesse novel does the magic theatre appear in?

Book prizes will be available for collection at the event.

Animal Collective have chosen the following books for their event’s reading list:

WET SOUNDS and A HISTORY OF SOUND ART INSTALLATIONS

ATP can also confirm for the event:

WET SOUNDS – underwater deep listening installations at the Butlins Pool with 2 sets of over water and 1 of underwater sound systems, effectively creating three levels of sound for a floating and diving audience. Fully immersed in sound, the experience is incredibly clear and intimate “…like being in the womb”. Joel Cahen plays a surreal abstract mash up / collage in duet with La Horrox. For more info see www.wetsounds.co.uk

A HISTORY OF SOUND ART – an engaging sound collage presenting an unique historical documentation of Sound Art from the early 20th century to present day. The composition weaves through different sound works throughout the century with narratives and ideas from some of the prominent artists in the field. It is an insightful retrospective into the craft of sound and its development as an artistic practice, from Edison’s first sound film in 1895 to today. Composed and Arranged by J Milo Taylor. Mixed by Joel Cahen.

As part of the Animal Collective curated free Cinema programme we can confirm a screening of Oddsac – A visual album by Danny Perez and Animal Collective which has received stunning reviews over the last year.

The completed line-up for the event looks like this…

THIS THURSDAY APRIL 21ST BEFORE THE BANK HOLIDAY WEEKEND – 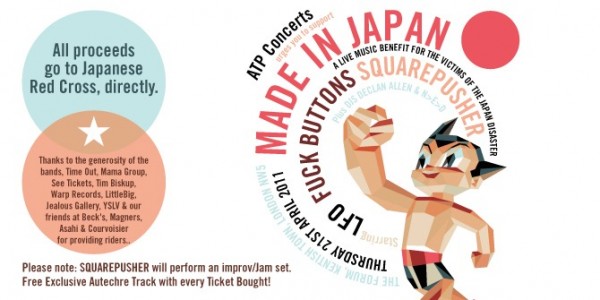 On Sale Now via www.atpfestival.com – All Profits Go To The Japanese Red Cross

ATP urges you to support the victims of the Japanese disaster – this coming Thursday 21st April before the bank holiday, we are holding a Benefit Concert at London’s Kentish Town Forum – all of the profits from which will go to the Japanese Red Cross and will be used towards helping the Japanese people recover from this devastating natural disaster over the coming months and years. The event has a stunning line-up featuring Squarepusher (playing a special improv/jam set), LFO and Fuck Buttons as well as guest DJs Declan Allen and N>E>D.

The crisis is ongoing and will be for a long time. Tickets are still available – please help to spread the word to as many people and places as possible to make this event a success and make as much money as possible for the Red Cross. At the show we will also be holding a huge raffle in which some amazing prizes will be up for grabs. All proceeds go to the Red Cross.

Here are just a few of the items donated and we’ll be adding more to the list as they come in so keep an eye on our website. Some highlights include…

Thanks to everyone that has donated prizes and thanks to our friends at Beck’s, Magners, Asahi & Courvoisier for providing riders for the event.

TICKETS ON SALE NOW via www.atpfestival.com 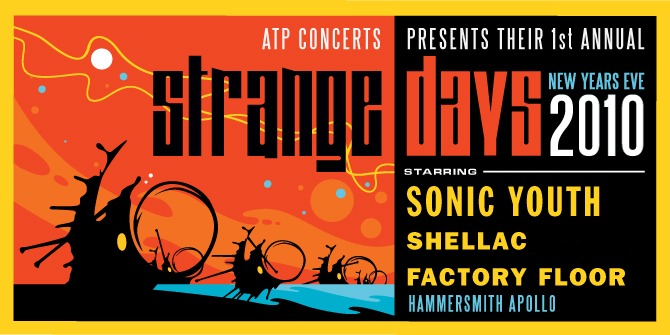