Ozzy Osbourne Diary of a Madman/Blizzard of Ozz Def. Editions! 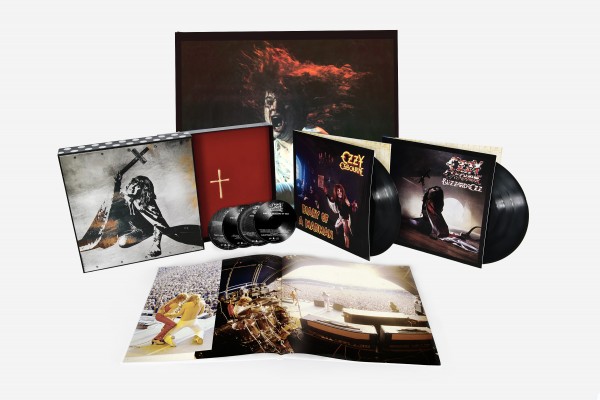 DEFINITIVE EDITIONS OF  OZZY OSBOURNE’S LANDMARK SOLO ALBUMS ‘BLIZZARD OF OZZ’ & ‘DIARY OF A MADMAN’ RESTORED & REMASTERED FROM THE ORIGINAL RECORDINGS SET FOR RELEASE MONDAY, MAY 30 ON SONY CMG

Both Albums On CD & Vinyl

This year’s long winter will continue well into the spring with a blizzard as intense as it gets.

On May 30th, music fans will have their first taste of re-issues from rock icon OZZY OSBOURNE’s catalogue of work with the releases of two albums which form the cornerstone of Ozzy Osbourne’s career as a solo artist:   Blizzard of Ozz and Diary of a Madman.  Long revered by rock fans around the world, these two albums created a template for hard rock in the 1980’s and beyond as they were marked by the ground-breaking and  historic union of Ozzy and the late guitar hero Randy Rhoads.  These definitive versions of 1980’s Blizzard of Ozz (with previously unreleased bonus tracks) and 1981’s Diary of a Madman are available individually on vinyl or CD, or together in a deluxe collector’s box.  All versions were restored and re-mastered from the original analog sources by George Marino.

For serious fans and collectors, the limited edition 30th Anniversary deluxe boxed set houses the restored and re-mastered vinyl and CD editions of Blizzard of Ozz and Diary of a Madman, the “Ozzy Live” compact disc.  Beyond the music, the box set is highlighted by a variety of exclusives including an expansive 100-page coffee table book, a two-sided wall-size poster, a precise and detailed full-size replica of Ozzy’s iconic gold cross that he has worn for 30 years, and “Thirty Years After The Blizzard” DVD.

This new “Thirty Years After The Blizzard” DVD chronicles Ozzy‘s years with Randy Rhoads features previously unseen footage of Ozzy and Randy filmed in 1981 & 1982; it incorporates rare archival photos and films; along with new and revelatory interviews with Ozzy and Sharon Osbourne, Lemmy (Motörhead), Steve Vai, Nikki Sixx, Rob Halford, Zakk Wylde, Bill Ward and more. The DVD also contains over 70 minutes of additional rare live performances and interviews; included is the premiere of more than 30 minutes of newly-discovered never-bootlegged footage of Ozzy and Randy from the Blizzard of Ozz tour shot from the front of the stage at New York’s fabled Palladium on May 2, 1981.  This new feature is a must-see for aficionados of Ozzy‘s epic release, Blizzard of Ozz and its pivotal effect on rock & roll history.

Blizzard of Ozz and Diary of a Madman are landmark albums that took metal in a new direction in the early 1980’s, inspiring whole new generations of rock bands and fans.  “Crazy Train,” the first single from Blizzard of Ozz, has become one of Ozzy‘s musical signatures, a perennial on the rock playlists and as part of Ozzy’s live performances.

Diary Of A Madman (Legacy Edition)

Ozzy Live (recorded on the Blizzard of Ozz tour)

10. Children Of The Grave

Diary Of A Madman (Legacy Edition)