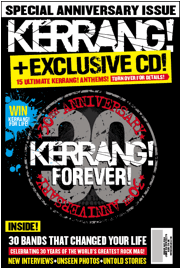 TOP 30 COUNTDOWN OF THE MOST INFLUENTIAL ROCK BANDS EVER

On 6 June 2011 the world’s greatest rock magazine Kerrang! will celebrate 30 years with a special issue of the magazine dedicated to the last three decades of rock!

“When the first issue of Kerrang! was printed 30 years it ago, it’s no exaggeration to say that it changed the world as we know it. It was the first magazine to cover the heavier end of music and to do it with the same passion and positivity as those that read it. I should know: I bought the first issue of the magazine!” says Editor-In-Chief/Associate Publisher Phil Alexander.

On sale this week (Wednesday 1 June), the 30th Anniversary issue of Kerrang! will contain a Top 30 countdown of the most influential rock & metal bands of the last 30 years with exclusive new interviews, untold stories, and never-seen-before photos culled from the Kerrang! archives.

This all time top 30 list sees metal veterans Metallica, Pantera, Slayer, Iron Maiden and Napalm Death as well as classic rock legends Guns ‘N’ Roses and AC/DC battling for pole position against the biggest rock names of the last two decades such as Foo Fighters, My Chemical Romance, Green Day and Marilyn Manson – who will be named Number One?

Furthermore, an exclusive covermount CD entitled ‘Kerrang! Forever’ will be included with this issue, featuring 15 ultimate Kerrang! anthems from some of the biggest names in rock music including Metallica, Ozzy Osbourne, My Chemical Romance, Biffy Clyro, Slash and Slipknot.

“In the last three decades the magazine has proudly supported every major rock band on the planet. We’re delighted that so many of these artists have joined us to celebrate our birthday on the Kerrang! Forever CD,” says Alexander. “It’s a heavy duty compilation that genuinely celebrates the very best of Kerrang!’s world.”

This special issue of Kerrang!, kicks off a whole month of 30th birthday celebrations, which continue with the Kerrang! Awards fuelled by Relentless Energy Drink on 9 June, two one-off London shows with hot new rockers Escape The Fate (10 June) and Black Spiders (16 June) and an exclusive show with Ozzy Osbourne at Hammersmith Apollo on 21 June. Ozzy will be honoured as ‘Kerrang! Legend at the Kerrang! Awards, in celebration of his own successful and long career as one of the most iconic frontmen in the world.

Kerrang! Magazine launched on June 6 1981 as a supplement with the now defunct Sounds magazine, as the world’s first specialist metal magazine. The name Kerrang!, now an iconic and world renowned name, was picked to imitate the sound of a distorted powerchord…although at the time it had more R’s! The first ever issue had Aussie hell-raisers AC/DC as their cover stars.

Kerrang! enters its 30th year as the world’s biggest music weekly and a multi-platform youth culture brand for all rock genres. The magazine, along with its website, Kerrang! Radio, The Kerrang! Awards, Kerrang! Tours and Kerrang! Podcasts ensures the brand remains a unique route for reaching a young dynamic audience. With over 120,000 followers on Twitter, over 75,000 ‘likes’ on Facebook, the iTunes chart-topping podcast and a constant ability to break new bands – as seen recently with Black Veil Brides – Kerrang! maintains its position at the forefront of the world of rock!

“As well as being the world’s biggest selling rock weekly, Kerrang! is now a genuine brand that reaches millions of people every day” says Alexander.  “It is continuing to grow and to look forward. Despite Kerrang!’s evolution down the years, it has remained true to the positivity and excitement that inspired it in the first place. Those values have not changed and we are proud of that.”

Sankeys in June – Kaluki Launches Every Saturday from June 11th