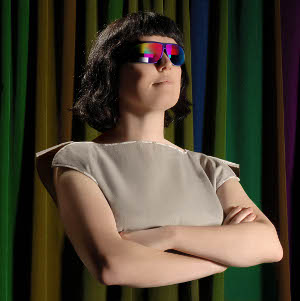 Bachelorette will be playing a string of live dates in the UK next week supporting The Phoenix Foundation as well as a rescheduled one-off London show at CAMP Basement on June 22nd. Her new album is also out NOW and to celebrate we’ve got a brand new video to show you.

You can see the new video for ‘Polarity Party’, taken from the album here

Originally from New Zealand but currently based on the east coast of the USA, Annabel cut her teeth in cult bands such as Christchurchʼs psychedelic surf outfit Hawaii Five-O, Space Dust and the Hiss Explosion, then went on to complete post-graduate studies in computer-based composition at university. After her studies, Annabel returned to what she loved best – making psychedelic pop music – and Bachelorette appeared on the scene in 2005. Her self-titled third album was released on May 16th 2011 through Souterrain Transmissions.

Her breathtaking live set developed around a ʻbandʼ of 3 old CRT monitors, which were borrowed from acquaintances or picked up from recycling stations and thrift stores in each town. On stage, the CRT ʻbandʼ simultaneously displayed waveform patterns and other synchronised visuals corresponding to separate recorded instruments, as Annabel sang and played along with them.

Bachelorette will be playing these UK dates: