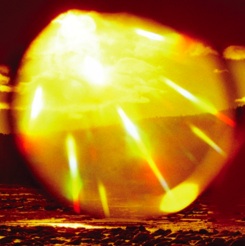 “One of the heaviest and most exciting collaborative projects of the year…  they play off the other’s strengths in a focused show of dusty, monolithic, mystical desert drone.”

The friendship of Eternal Tapestry and Sun Araw’s Cameron Stallones goes back to the Not Not Fun curated Neon Commune Fest, January 2007 at the much loved, and missed, Echo Curio in Eagle Rock, LA.  Eternal Tapestry shared the second night’s bill with Cameron’s old band Magic Lantern (Barn Owl and Pocahaunted rounded out the night’s festivities!), and the two psych crews hit it off immediately. LA shows were played together every time Eternal Tapestry made it south. Fast forward to Austin, TX for SXSW 2010 when Eternal Tapestry shared a bizarre afternoon parking lot gig with Sun Araw. The Tapestry had a live broadcast in-studio session lined up on KVRX student radio that night, and in true Tapestry fashion they invited their buddy Cameron to join in.
The session took place in a large TV studio on the University of Texas (UT) campus, with the band setting up in a big circle. The line-up was Dewey Mahood and Nick Bindeman on guitars, Jed Bindeman on drums, Ryan Carlile on tenor sax, Yoni Kifle on bass, and Cameron Stallones on keyboard and trademark flute. After a brief discussion of mood, the six musicians improvised together for 45 minutes continuously. The music is heard as played that evening – no overdubs, and only a few edits to create a four section suite for the LP release. The piece is titled Night Gallery, in homage to the surreal early 1970’s TV show produced by Rod Serling of Twilight Zone fame. It was this program that the six musicians fell asleep to, and woke up with, during their five day stay in Austin.
Eternal Tapestry Discography: