New tracks ‘Fall Apart’ and ‘Whatever Happened To You’ now streaming – www.facebook.com/everyavenue 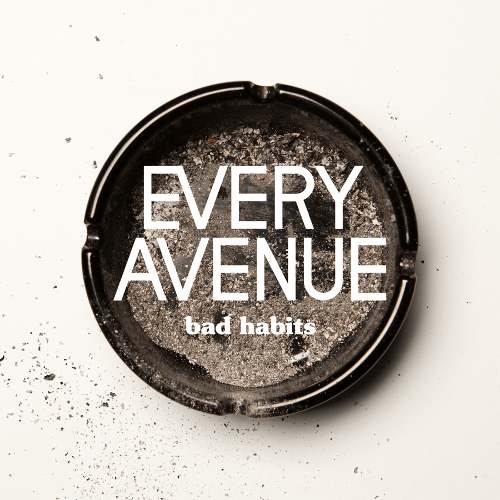 The band has been a staple on the rock circuit since 2004, clocking up tours with All Time Low, Boys Like Girls, Never Shout Never andMayday Parade, and was featured in Alternative Press’ Most Anticipated Albums 2011. Every Avenue will be appearing on the entire Vans Warped Tour this summer.

Giving their brand of euphoric rock a sharper, slicker edge, Every Avenue explores themes of lust, temptation and self-acceptance on new album Bad Habits‘ 10 driving tracks, solidifying their place in the next breed of strong contenders in pop rock. Their third full-length sees the band lacing their infectious melodies with a glimpse of a darker side, embracing their next phase with the passion of a band truly defining their sound and making it their own. The band’s single ‘Tell Me I’m A Wreck’ was in high rotation on Sirius Hits 1, and the poignant video resonated with fans worldwide, picking up airplay on MTV2 and was named Kerrang! TV’s Video Of The Week. With an entire summer of Vans Warped Tour in front of them, Every Avenue stands defiant, a stable of killer tracks under their belts, poised to take Bad Habits to new heights. Get ready to get addicted!

Album Tracklisting –
1. Tie Me Down
2. Whatever Happened To You
3. There Tonight
4. Fall Apart
5. Just Getting Started
6. Only Place I Call Home
7. Someday, Somehow
8. Hit Me Where It Hurts The Most
9. I Can’t Not Love You
10. Watch The World

Win a private gig at your house with Benjamin Francis Leftwich!