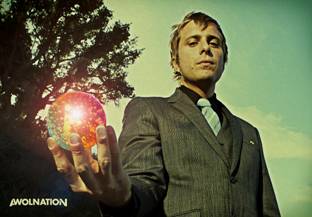 “AWOLNATION are about to go stellar..In bygone times Aaron Bruno would be drowned as a witch for this kind of magic” 9/10 – Rock Sound

AWOLNATION’s debut album ‘Megalithic Symphony’, out this week, is a bold and daring debut which references an array of genres, featuring a heady blend of electronica and infectious hooks amalgamating into a supersonic aural montage for the senses. Check out a full stream of the record here – http://awolnationmusic.com/downloads/

A full UK tour will follow later this year.

To tie in with these dates, the single ‘Sail’, taken from debut ‘Megalithic Symphony’, will be released on September 12th 2011. A top 10 hit in the US and number 2 in Canada at alternative rock radio, with sales approaching 200,000 downloads in the US and approaching gold status in Canada, ‘Sail’ is accompanied by a video that sees AWOLNATION, who co-wrote the treatment, abducted by unseen alien forces. Check out the music video here – http://youtu.be/PPtSKimbjOU

On the single Aaron Bruno says:

“I’ve always held the British music fan’s taste to a higher standard. I’m so grateful that our music is being embraced by radio and listeners, even though we talk funny and spell color and behavior different than you do. It’s an honor to have the opportunity to come back after a sold-out show to share our songs with more people. A further testament to AWOLNATION having no borders.”

AWOLNATION fever has been spreading like wildfire across the US and now in the UK. The album is currently climbing the Billboard album charts, topping the Billboard alternative new artist chart at Number 1 and getting to Number 9 on Mediabase alternative rock charts. With incredible shows at SXSW and various cities far and wide, fervent gig goers have been queuing around the block to be part of the frenzy. Having conquered many territories, Aaron Bruno’s outfit are back to fly the flag in the UK, and are sure to be an unstoppable force to be reckoned with!

Catch AWOLNATION on Channel 4’s ‘4 Play ‘ special filmed on their recent trip, to be broadcast on July 4th after midnight.

Awolnation – Back From Earth 8 November 2010 | aaamusic