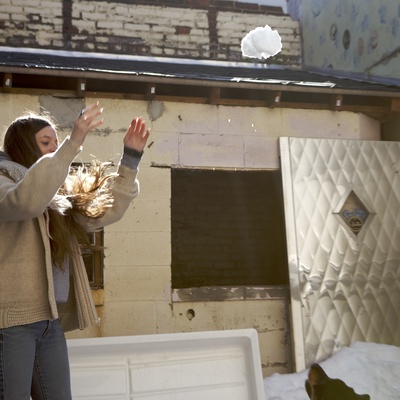 Wichita Recordings are pleased to announce the new album from Meg Baird, best known for her stunning songwriting, guitarwork and vocal contributions to the US folk band Espers. Her second solo album Seasons on Earth will be released on 26 September. There are plans for some intimate live dates around the release date.

There’s a rare intimacy in Meg Baird’s music. She shares secrets, she breaks your heart, she tells you how to fix it. Her second album Seasons On Earth is a beautiful, moody masterpiece of understatement—part wanderer, part flower, part assassin—moving stealthily from light to shadow and back again.

Long-based in Philadelphia, Meg became involved in a vibrant music community forged by outfits such as Siltbreeze Records, Bardo Pond and a network of low-to-the-ground artist collaboratives. In the early years of the last decade—along with Greg Weeks and Brooke Sietinsons – Meg help found the band Espers. The group—one of the most cryptic, inventive and adored bands among an eclectic peer group, released four records to widespread critical acclaim. Meg Baird’s ethereal vocals, guitar arrangements, and songwriting contributions were cornerstones of the Espers’ cooperative sound.

Meg Baird’s influences run deep and wide, and a unique style was revealed in the astonishing 2007 solo debut, Dear Companion. The melancholy and nuanced acoustic LP found Meg compared to folk icons like Sandy Denny and Pentangle’s Jacqui McShee. And in creating a project that nearly played as a love letter to record collectors, she re-interpreted songs by Chris Thompson , Fraser & Debolt and Jimmy Webb among others. The covers were sparse and hauntingly heartfelt, but the album’s original compositions were as strong as any from the 1970s singer-songwriter era. Dear Companion was a complex look at love, betrayal, and isolation. And the work garnered the attention of folk heavyweights and contemporaries alike—she opened for Bert Jansch and Michael Chapman, and contributed to recordings by Will Oldham (Ask Forgiveness, 2007), Sharon Van Etten (Epic, 2010) and Kurt Vile (Smoke Ring for My Halo, 2011).

Seasons On Earth reverses Dear Companion’s ratio of covers to originals. There are only two previously-recorded songs here—Mark-Almond Band’s “Friends” and The House of Love’s “Beatles and the Stones,” —both taken to the darkest edges of their emotional depth. The originals, however are revelatory—at once stark and enveloping—crafted in a style honed over the past four years by Meg that hooks you with a hushed and mysterious intimacy and welcomes the listener with a sense of empathy and gorgeous plainspoken poetry.