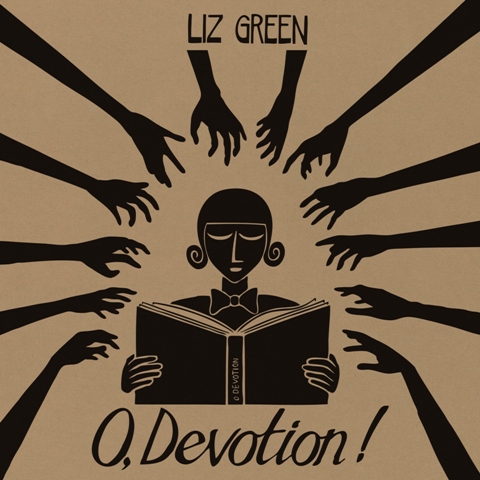 The least exotic thing about tragi-comic pop artist Liz Green is her name. No Alela here – according to family lore the twenty-eight year old Green is descended from a Liverpool line that includes executioners and rag and bone men. It’s at least certain that she carries on an ancestral tradition of storytelling, as her debut album O, Devotion! will testify when released by Play It Again Sam on 14 November.

Whatever took her so long? It’s now four years since Green’s first single, the critically adored, now sought-after ‘Bad Medicine’, appeared, and she won the Glastonbury Emerging Talent competition to find herself entertaining the main field from on high. Tipped everywhere from Mojo to The Sun, her uniquely lyrical blend of chanson, jazz and the starkest a capella, a distinct fingerpicking style more cable-knit than filigree and an idiosyncratic vocal style nodding to saints (or maybe martyrs) Judy Garland, Billie Holiday and Karen Dalton (Liz bashfully adds at this juncture “There’s a few more lives to be led and a few more hearts to be broken before I ever sing with as much soul as those ladies”) seemed set to conquer all. Yet a wonderful ‘Back in the U.S.S.R’ Beatles cover on a covermount CD aside, she had seemingly dropped out of sight.

Except she hadn’t. Green has toured consistently, here and abroad, and overcome her dread of the recording studio with aplomb. Sequestered in Hackney’s legendary Toerag under the aegis of Liam Watson (White Stripes, everyone else) and subsisting on the local diet of ackee and saltfish, she finally relaxed enough to enjoy the process, so different from the instant gratification provided by an audience.

“I didn’t really get on with recording. After playing live, which is so of the moment, you go to a studio and are stuck in this sterile environment with microphones pointing at you. I used to dread recording days. After three years we still weren’t any nearer and I’m sure everyone was as frustrated as I was,” she recalls, “I even tried drawing faces on the studio wall – to give the impression of an audience – or getting horrendously drunk so as to emulate my live behaviour.

“I needed someone to say, “Stop! That’s the one”. Which is what Liam did. And it finally sounded like what I thought I sounded like in my head.” Now she could really make the record she had imagined. “I thought, “Fuck it. I’m gonna get me that brass band I always wanted.” The arrangements on O, Devotion! are revelatory, Kurt Weill via New Orleans performed by the works brass band. “I’m especially proud of ‘Bad Medicine’. That’s how it was always meant to sound. A different bag of badgers altogether from the first version of it. I hummed that solo to Peri [Eskell, trumpet] through a kazoo,” Liz reveals, “Because I can’t afford to take a full band everywhere I go, I’ve built up a bit of a reputation for being a great mouth trumpet player.”

Green’s world features shadow puppetry and contraptions designed to ease her way into performance. She owes as much to a tradition of shape-shifting feminist artists from Claude Cahun and Marcel Moore, Lee Miller and Frida Kahlo to Cindy Sherman and Tracey Emin as to musicians from Lily Allen to Bessie Smith, prosaically-named exotics both. Yet young Liz, born into Britpop, devoured music growing up. “I exhausted the 80s of punk and new wave, digested the 70s of David Bowie and mined my dad’s incredibly impressive collection of 60s Motown and Merseybeat.”

“Then I began to enjoy discovering little nuggets of gold. Field recordings, songs sung at old medicine shows, cabarets and dancehalls. There’s a whole history in the songs. The distilled essence of eras gone by. I think I belong a bit in every one of them,” says Liz, unafraid to present that which others store only in imagination. She continually redefines the line between the personal and the performance. “I think it’s okay to be as many things as you want and to change from one day to the next whether through dressing up or make up or your attitude or the music you listen to. [Surrealist photographer] Claude Cahun said ‘underneath this mask another mask, I will never be finished carrying all these faces’.”

If she can imagine it, she can bring it to life. That’s why her first album includes a single inspired by Holocaust chronicler Primo Levi and sung from the part of a self-reliant refugee (‘Displacement Song’) alongside the tale of an inveterate funeral-goer a la Harold and Maude (‘Luis’ – a Metro headline ‘Luis Squasilli from Mexico has been to every funeral in his home town for the last twenty years’ was the jump off point here) and the astonishingly visceral, unashamedly bleak album highlight ‘Gallows’, exploring the inevitability of a bad end. And this is not even counting the hushed and “desperate clarity” and dignity of ‘The Quiet’ which is “about looking in through the windows of old people’s homes – at old people looking out” which delivers the exquisite gut wrench of the following lines ‘O my skin is thin now/ And I can’t hold you/ Within these paper hands/ I’m much too weak to stand.’

Even cheerier moments such as the near-anthemic ‘Midnight Blues’ and the ultra-melodic faux-chanson of ‘French Singer’ (delivered at the piano on this new version) are not so straightforward. “People have had this played at their weddings,” she says of the latter, “And I want to explain to them that it’s the romantic dream of how love might feel by a young girl who’s never had any. Perhaps the dream you have of love is the most romantic love of all.”

A lifetime in gestation, it’s no wonder the timeless classicism of O, Devotion! took its sweet time to hatch. “This has been a lesson in letting go. I think part of me wanted to keep the songs to myself. I was so scared of being misinterpreted or misunderstood. But I’m happy to give them over now, for people to take whatever they want from them,” says Green.

Incidentally that title came from a dream wherein a man, maybe Son House, sang to sleeping Liz. All she remembered of his song on waking were the words ‘O Devotion’. “I searched everywhere for it – thinking it was likely a song I had read about but not heard, but I couldn’t find it” she says. “The longer this album took to make, the more it seemed to suit it. Devotion is love and frustration, hope and desperation, exhaustion and joy. Without a level of blind devotion, it wouldn’t have ever been made.”

It has and we are swooning, or in Liz’s final words, it’s all about “capturing a little bit of soul”. Job done Liz Green.