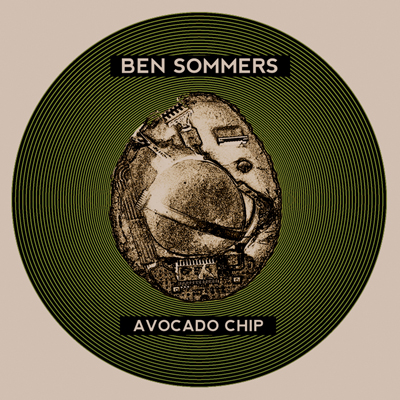 Having established himself on the live London circuit as a peerless troubadour of hypnotic eccentricity, ‘Avocado Chip’ is the absorbing statement of intent that Ben Sommers was always destined to make. ‘Avocado Chip’ is a place; a state of mind; a dark vision of villains and political axe-wielders, Stepford wives, husbands, sons and daughters; con men and women; evil deeds and all manner of shenanigans, fully realised with consummate poetic vision and gloriously melodic panache.

‘Avocado Chip’ exists beyond the realm of the simple explanation. It is more of a world than an album – a dystopian depiction of the modern world through its narrator, Sommers himself. Playing on his inimitable vocal strength and magnitude of instrumentalism, his is a voice that manages to naturally course through every emotion that this surrealist world feels.

The world of Starving Jane – the mythical town upon which all of Sommers’ stories are based – is one that is littered with tales of obsession, greed and triumph. It is a collection of stories and emotions that Sommers does not shy away from when it comes to his musicality. Conceptual without being overbearing, it manages to demonstrate every facet of Sommers talent with enviable aplomb. Whether he’s twisting this manufactured community’s chants for freedom through the tribalism of ‘Sapien Express’ or playing the emotionally torn anti-hero through ‘Flaming Moon’, his breathtaking creativity never shies away from the limelight.

“The musical composition is vital to the story. There is an intended ‘chaos’ in the music – partly to convey the meaning of the songs or their subject matter and also to highlight the turmoil that exists in the town. Although the whole basis of the concept of this project is marrying the organic and digital in the way that society functions now (Avocado = organic ; Chip = digital). I have drawn a lot from personal experience, memories and dreams. Part of the stories/ characters are loosely based on people I have known and things I have gone through in my life. Other parts are how I see the world. It’s been a very fluid process”

As if this tapestry of immense musical intricacy was not enough, Sommers is also including some of the chapters from ‘Avocado Chip’s accompanying story in the digital booklet for the album. Including everything from the Orwellian tale of his character’s battles to a detailed map of Starving Jane and its relevant surroundings – all designed by Sommers himself, along with illustrator Leaf Vigurs – the album, in all of it’s parts, embodies every worldly aspect it so warrants.

‘Avocado Chip’ will be available digitally from October 3rd.