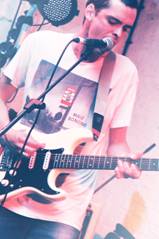 Art Is Cheap represents the third release of 2011 from the Mazes camp. First of all we had their proper debut album A Thousand Heys released in April on Fat Cat. Then there was the IBB Tape, a 12″ collection of demos, live jams from the band’s early days, covers and musings and now we have this….. Jack Cooper (songwriter/vocals) is releasing a collection of 15 songs from his Art Is Cheap project called hmmm Art Is Cheap.

At the tail end of the summer Jack started a project where he would write and record a song in exchange for an idea, a lyric or even just a song title. Over the course of two months, Jack wrote 35 songs for people encompassing a variety of subjects, styles and audio fidelities and this digital album represents his favourites from the songs that he wrote.

In true DIY fashion, the album is released by Jack himself via Bandcamp only, and helped by FatCat only in terms of promotion. The full album of 15 tracks is just £5, and individual tracks are 50 pence each… but the entire thing is available to stream.

Mazes have been busy writing their sophomore album, and plan to go into the studio at the end of the year to start recording. It will see a release in 2012, date TBC.

For a more in depth explanation of the Art Is Cheap project… go here http://www.crackintheroad.com/music/10615-interview-jack-mazes-art-is-cheap/

And the Bandcamp page is here… http://jackcoopermazes.bandcamp.com/