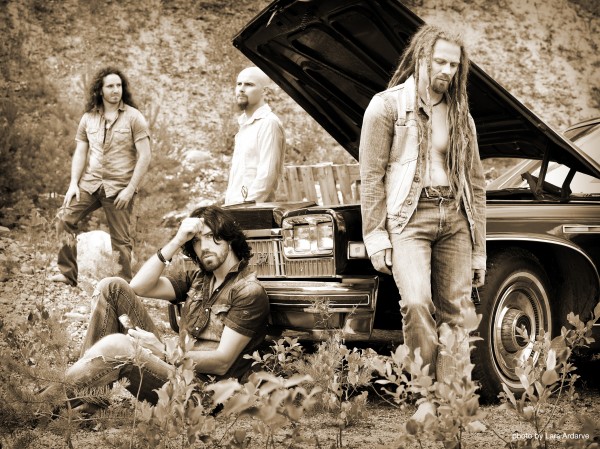 AAAmusic & Meanfiddler are giving away a pair of tickets for the London show of Pain Of Salvation!

For your chance to win, simply email win[at]aaamusic[dot]com – subject line Pain Of Salvation, with your name and the name of your guest.

Sweden’s PAIN OF SALVATION once again they prove their unmatched reputation as true, modern rock artists by delivering “Road Salt Two”, the twin-companion ”Road Salt One” (2010). Part two is as opulent in creativity and stylistic flirtation, as well as at the same time genuine, musically coherent and brave.

2010 was an eventful year for PAIN OF SALVATION: Several chart entries with “Road Salt One”, Russian train bombs, a successful appearance at the mainstream-oriented Swedish “Melodifestivalen” song-contest, the release and ban of a highly controversial video clip for the song, “Where It Hurts”, as well as acclaimed touring activity all over Europe, India and South America…

“Road Salt Two” once again presents PAIN OF SALVATION at its most emotionally intense and stylistically colourful, with a predominant 70’s vibe. Yet, in direct comparison to “Road Salt One”, it might strike the listener as being a bit darker. The album serves as a perfect culmination between ‘old’ and ‘new’ PAIN OF SALVATION, while also presenting a different and previously unheard side of the band. “Road Salt” goes full circle historically for the band.

A brief biographical re-cap: Since the foundation of his first significant band, Reality, in 1984, mastermind and bandleader Daniel Gildenlöw has consistently followed his own concept of diverse, technically accomplished and border-transcending progressive rock. He renamed the band to PAIN OF SALVATION in 1991 and has released six studio albums as well as one unplugged recording previous to the “Road Salt” opus, among them classics such as “Scarsick” (2007), “BE” (2004) and “Remedy Lane” (2002). Each of these releases has received acclaim as a multi-layered concept album, dealing with tough socio-political themes, while also manifesting very intimate, individualist views.

Making no exception to this tradition, “Road Salt Two” (also referred to as “Ebony”) opens up a new chapter for PAIN OF SALVATION, promising to kick off an adventurous and lengthy journey for the band to bring their music to all corners of the world. Having already been out on a headlining tour in Eastern Europe in October, the band then embarked on a larger European run together with Swedish comrades Opeth throughout November and December of 2011, Now having accomplished so much, they are back in Feburary 2012 to for a regional headline tour of the UK.

Note: A limited edition version of “Road Salt Two” will be available in Digipak format including extended artwork as well as bonus track material!

Pain Of Salvation embark on a headline tour in Feb 2012: